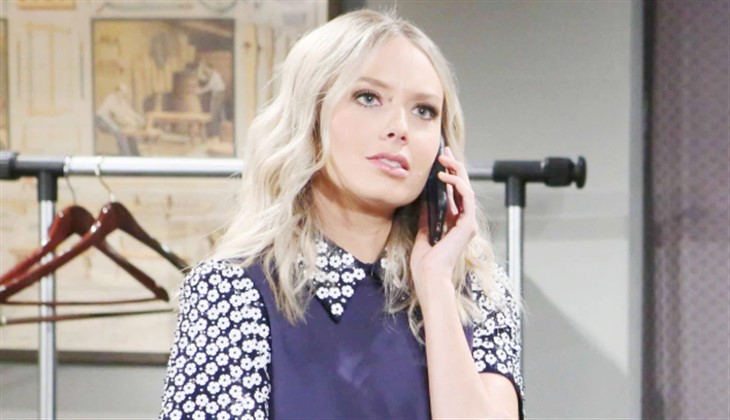 CBS The Young and the Restless spoilers document that Phyllis Summers (Michelle Stafford) was in a bad mood the last time Abby Newman (Melissa Ordway) and Y&R viewers saw her. Now, as new episodes get set to air next week, it’s fair to wonder what Phyllis will do to stop Abby’s new hotel project from moving forward?

Abby played Phyllis brilliantly after Chelsea Lawson (Melissa Claire Egan) was coerced to sell her shares in The Grand Phoenix hotel. Ordway’s character worked with a real estate agent while negotiating a sale price for her half of the hotel. Abby reached a legal agreement with Phyllis before telling her that she was planning to build a rival hotel across the street.

Phyllis was not pleased that she’d been bested, but considered it to be round one of their business fights.

The Young And The Restless Spoilers – The Big Dig Is Underway

Very loud sounds of machinery could be heard inside the Phoenix in the spring, as land for Abby’s hotel was being prepared by construction workers. Phyllis was beside herself and hadn’t determined how to combat what was happening at that time.

Michael Baldwin (Christian Le Blanc) and Phyllis have been friends since the 1990s. He’s a great lawyer but is also currently the District Attorney of Genoa City, Wisconsin. So, he’s unable to intervene on Phyllis’ behalf. That makes a non-legal development more likely.

Would it be too outlandish to suggest that Phyllis plants fake evidence that appear to be, or actually is historically significant on the ground where Abby’s new hotel is scheduled to be built? Of course not.

Assuming the above would mean that construction would cease while various experts conduct archaeological and other types of investigations. Those efforts could take weeks, if not months, in an attempt to verify if Abby was building on the ground that should be protected.

This type of counteraction could halt Abby’s plan to build the rival hotel as quickly as possible. Her true aim isn’t to compete with Phyllis, but to eventually force her out of business and as Abby suggested, turn the Phoenix into a gym that clients of the new hotel could use.

The Young And The Restless Spoilers – Creating Protected Ground

Duplicity has long been Phyllis’ trademark. She’ll literally do anything to get her way. However, she has confronted worthy adversaries in the past and hasn’t always won.

'The Young And The Restless' Spoilers: Amanda Makes Major Decision – Nate Or Billy?https://t.co/1wghfvtyEa

Abby has proven her business acumen and was underestimated. So, if a version of Phyllis’ suggested response happens, then viewers shouldn’t expect that to be the end.