The Bold and the Beautiful Weekly Spoilers April 13 To April 17: Sally Convinces Wyatt They Belong Together As Flo Discovers Her Secret 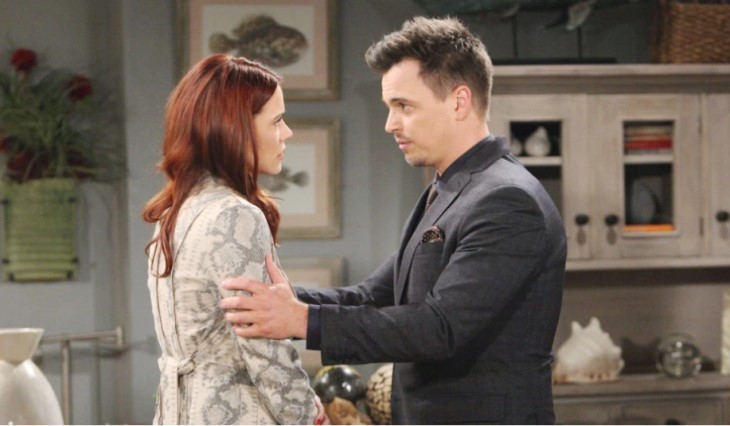 The Bold and the Beautiful promo for the week of April 13th through 17th indicates that Sally Spectra’s (Courtney Hope) secret could be exposed as she tries to convince Wyatt Spencer (Darin Brooks) that they belong together.

Sally and Flo Fulton (Katrina Bowden) have been battling over the effects of Wyatt for a while now.

Sally and Wyatt were perfectly happy in a relationship until his ex-girlfriend Flo showed up in Los Angeles.

Wyatt and Flo were high-school sweethearts, but their relationship ended when Wyatt and his mom Quinn Fuller (Rena Sofer) moved away.

Flo never got over Wyatt, and he still had feelings for her too. But he had moved on with his life and was dating Sally.

However, Wyatt and Sally had a misunderstanding due to her ex Thomas Forrester (Matthew Atkinson), and broke up.

Wyatt reunited with Flo, however, their happiness would soon be short-lived. After discovering that she was part of the baby switch involving Beth Spencer (Madeline Valdez), Wyatt dumped Flo. He was furious over her deception, and the pain she caused his brother Liam Spencer (Scott Clifton) and Hope Logan (Annika Noelle).

Immediately Wyatt went back to Sally, but Flo was determined to win him back.

Flo eventually succeeded in winning back Wyatt’s trust, and once again poor Sally was left heartbroken.

Once again Wyatt and Flo’s reunion would be cut short when they learned Sally was “dying.”

Realizing she didn’t have much time left, Wyatt decided to spend her final days with her.

Flo gave him her blessing believing it would only be temporary.

Yet, Sally is trying to convince Wyatt to give their relationship another chance. In a clip from the video, Sally says they would be together if it wasn’t for Flo.

Wyatt is now torn between his love for the women. Flo is the woman he wants to be with, yet he feels obligated to stay with Sally, and believes he’s the reason she’s fighting for her life.

Flo has become tired of the situation with Sally. Even though she’d love nothing more than to be rid of Sally so she and Wyatt can be together.

However, Sally’s continuing to use her illness to keep Wyatt in her life.

Flo has become suspicious of Sally and begins an investigation. She questions Dr. Penny Escobar (Monica Ruiz) about Sally’s illness, but the doctor keeps her mouth shut.

When Escobar fails to provide her with the information, Flo decides to do some snooping herself. She logs into the doctor’s computer and discovers Sally isn’t sick.

Upon learning the information, Flo confronts Sally and tells her she’s a fraud and her plan is over.

So is it really over for Sally? Or does she have one more trick up her sleeve to remove Flo from Wyatt’s life?

Days of Our Lives Spoilers: Sarah Learns The Truth About Her Baby – Lashes Out At Xander On Their Wedding Day

General Hospital Spoilers: Chase And Sasha Fake Their Affair To Push Michael And Willow Together