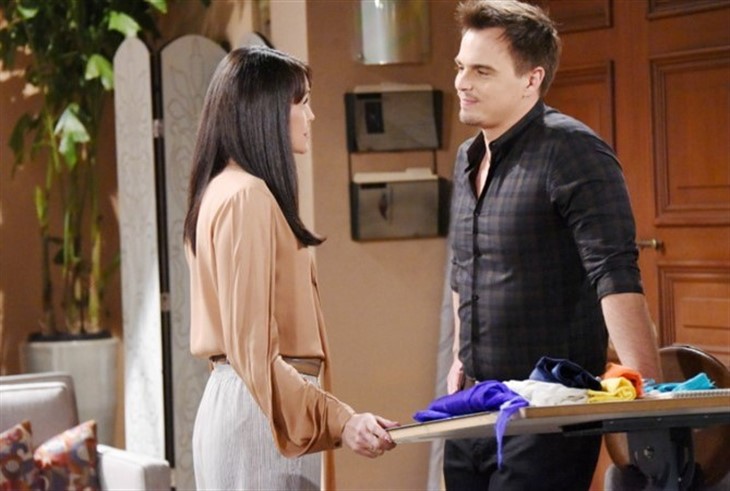 The Bold and The Beautiful spoilers tease that Wyatt Spencer (Darin Brooks) will plead with Eric Forrester (John McCook) to give his mother, Quinn Forrester (Rena Sofer) another chance!

Viewers of The Bold and The Beautiful will recall that Eric kicked Quinn out of the Forrester mansion, and his life, over her deceptions! When they first became romantically involved, Eric put some boundaries in place for Quinn that she was supposed to abide by. The biggest issue that she had to promise to change was her habit of taking the easy road of deceptions to achieve her goals, and those goals had to change too.

Quinn needed to learn to be unselfish and not manipulative and to be honest and not live her life by lying. In addition, one of the biggest things that irk Eric is her seemingly serial rivalry with Brooke Logan Forrester (Katherine Kelly Lang) and her constant sabotage of Brooke and Ridge Forrester’s (Thorsten Kaye) relationship. The straw that broke the camel’s back with Eric this time was her complicated manipulations of her friend Shauna Fulton (Denise Richards) into a sham Las Vegas wedding to Ridge!

This included showing a video that Shauna took of Bill Spencer (Don Diamont) and Shauna kissing in Hope Logan Spencer’s (Annika Noelle) cabin on her cell phone – which Quinn downloaded to a digital photo frame given to Ridge as a gift! Quinn made sure the video was shown prominently at a party celebrating Ridge and Brooke’s reconciliation after going through a rough patch and being separated all summer.

By her manipulations, she broke up two couples – Ridge and Brooke, and Bill and Katie Logan Spencer (Heather Tom)! That was what led to a drunken Ridge getting “married” to Shauna in Las Vegas that night! Then, after a “re-wedding” was arranged in the Forrester mansion so Ridge and Shauna would have memories, Shauna’s guilty conscience moved her to confess to Ridge, and canceling the wedding. Then Quinn got upset with Shauna, and as she talked to her on the phone reviewing every manipulation that Quinn had committed to get her married to Ridge, Eric overheard it all!

B&B Spoilers – Quinn Moved In With Wyatt And Flo Fulton

Quinn has the means to stay in a hotel indefinitely but kindhearted Flo Fulton, (Katrina Bowden) Shauna’s daughter and Quinn’s son Wyatt’s significant other invited her to stay with them. Wyatt wasn’t exactly wild about the idea and very upset with his mother for backsliding into her manipulative ways! However, he can see that his mother is miserable and broken over her falling out with Eric.

Wyatt visits Eric at his office in Forrester Creations, telling him he’s worried about his mom. He is very emotional and wants his mother to again have the stability that her marriage to Eric had provided. Eric is still very upset with Quinn, but he hears him out. He doesn’t just dismiss him and his concerns, although he does remind Wyatt that Quinn crossed the line this time. Wyatt totally agrees and tells Eric that his mother is truly sorry. But Eric is not ready to forgive Quinn or take her back this time. He is just fed up, and Quinn has claimed she has changed too many times in the past and it is obvious that she has not really changed very much at all.

The two men don’t disagree on much when it comes to Quinn’s manipulative nature, and they understand each other well. But as far as letting Quinn move back in or taking her back, Eric is just not ready. He does tell Wyatt that he’s a good son and appreciates his efforts in his mother’s behalf. But for now, Quinn moving back in is a hard pass for Eric!

The Young And The Restless Spoilers: Nate Overwhelmed By Shame – Toxic Doc Pushes Elena Away