The Bold And The Beautiful Spoilers: Steffy Shaken By Guilt – Hope Puts Liam In His Place 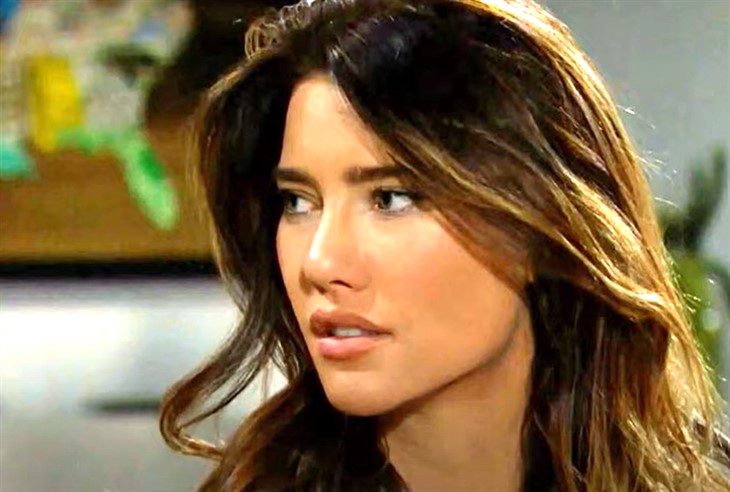 The Bold and the Beautiful spoilers tease that in Los Angeles Steffy Forrester (Jacqueline MacInnes Wood) will remain shaken by the guilt of what happened at the cliff house. Meanwhile, Hope Spencer (Annika Noelle) had more than enough of Liam Spencer’s (Scott Clifton) verbal tongue lashing. His claim that she wrecked their marriage was as naive as it was ridiculous.

Steffy had to face John Finnegan (Tanner Novlan) after degrading the bond they’d formed since she first met him in the very same hospital where he treated her this summer. The former patient, now significant other, was momentarily focused on the fate of her brother. At the same time Steffy was standing in front of the man she knowingly betrayed, while he stood physically distanced from her and Ridge Forrester (Thorsten Kaye) in the hallway.

Steffy learned that Finn is a healer. He used his medical skills to care for her after the motorcycle crash. Then, after they’d gotten to know each other on a more personal basis, Finn also proved to be an uplifting influence in her personal life.

This new couple was a positive part of the storyline B&B seemed to be developing. But Liam’s rant about Hope and Thomas Forrester (Matthew Atkinson), combined with the quantity of liquor that the former Steam downed, caused Steffy to believe that a real reconcile signal was sent.

Yes, it’s true that Liam directly questioned whether he made a mistake in having left her. But both people weren’t in a normal state of mind during that conversation and regretted what happened the next morning, while also offering mutual absolution to each other.

The mannequin was lying on the floor, where Hope forcefully put it just moments before Liam made his grand entrance stage right. Noelle’s embattled character realized what happened and told her hot-tempered husband what actually happened. She then laid Liam out with a statement about him never betraying their marriage.

Clifton’s character offered a memorable reaction shot as the cliffhanger, episode-ender headed to the traditional fade-out. Liam realized that his presumptions were dead wrong and that Hope still had faith in him, which he’d broken hours earlier with Steffy.

The Bold And The Beautiful Spoilers – Road Forward Full Of Potholes

There is no clear way out of what’s happened. First, Thomas’ health crisis must be the main focus. Then, after that’s been addressed, Steffy and Liam need to decide if they’re going to keep this dirty secret from the people they claim to love, or come clean and face the consequences of their actions.

However, teasers indicate that Steffy will be meeting with her doctor in the near future. That, combined with Wood’s anticipated maternity leave in the first half of 2021, means that Steffy could be having Liam, or Finn’s baby. Viewers can only imagine Noelle’s reaction shot if Liam proves to be the dad.

The Young And The Restless Spoilers: Sally Hits A Brick Wall – Hard To Win In Genoa City

General Hospital Spoilers: Sam Fed Up With Alexis Davis’ Tactics And Makes A New Plan To Save Mom