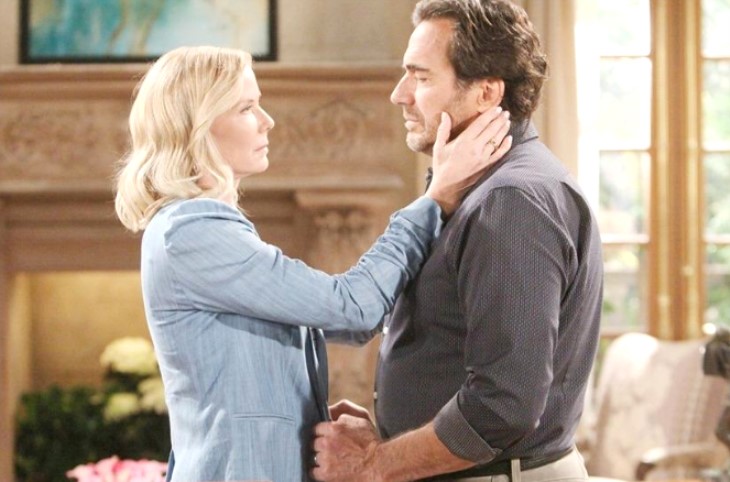 The Bold and the Beautiful spoilers reveal that Brooke Logan Forrester (Katherine Kelly Lang) thinks she has her husband back. However, when she hugged Ridge Forrester (Thorsten Kaye), it was clear he isn’t over the “Brill” betrayal. It is teased that he makes the sudden decision to go see Shauna Fulton (Denise Richards). He won’t let her say goodbye without an explanation.

B&B spoilers reveal that Brooke was determined to get back her husband. She also felt that he needed to be saved from Shauna. After the Forrester pilot returned to L.A. with a passed out Ridge, Brooke waited patiently for him to wake up. They chatted for a few minutes and Brooke hugged him, confident that their marriage was still intact.

However, when Brooke hugged Ridge, it was clear that he wasn’t satisfied being in her arms. He still isn’t over Brooke and Bill Spencer’s (Don Diamont) kiss. Plus, he can’t help but remember how good Shauna makes him feel, while it’s nothing but drama and pain with Brooke.

The Bold and the Beautiful Spoielrs  – Shauna Fulton’s Goodbye

The Bold and the Beautiful spoilers reveal that when Shauna called, Ridge practically leaped across the room to grab the phone. He flopped on the bed like an energetic teenager and was happy to hear her voice. However, she told him that it was time to say goodbye. He protested, but she hung up before he could get any answers.

B&B Spoilers – Going Back to Vegas for Answers

It is suggested that Ridge can’t get Shauna out of his mind. He might decide to go to Las Vegas to confront Shauna in person. He will want answers from her and doesn’t understand why she is saying goodbye to him. However, is he really prepared for what Shauna tells him?

Bold and Beautiful Spoilers: Sally Not Ready To Give Up, Manipulates Wyatt Into Letting Her Stay at His Home? https://t.co/jTPXAwDNdb pic.twitter.com/2QQ5ciFCTq

Why do you think Shauna said goodbye to Ridge without any real explanation? Does she realize that she will never win as long as Brooke is in the picture? Or is there something else going on?