The Bold and the Beautiful Spoilers & Recap Monday, May 11: Forrester’s Spring 1998 Showing Is A Resounding Success – Sally & Lauren Sneak Into The Show 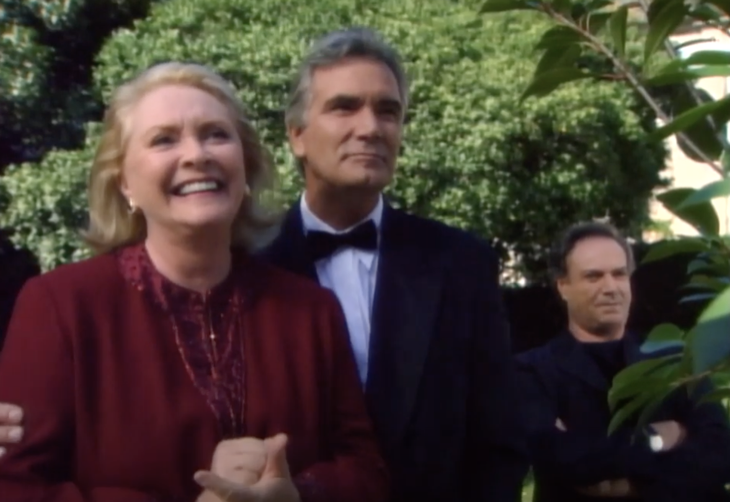 The Bold and the Beautiful spoilers recap for Monday, May 11, reveal that viewers saw an episode that originally aired on October 29, 1997, and centered on the Forrester Creations Spring 1998 fashion show in the Villa d’Este on Lake Como in Italy. John McCook, who portrays Eric Forrester, introduced the episode, welcoming viewers to “Fashion Week” on the show and noting how much fun he’s had playing Eric over the years.

The episode began backstage at the Forrester fashion show. Ridge Forrester (Ronn Moss) read a newspaper while Eric fussed with a makeup artist over one of the model’s looks. Eric asked Ridge if he’d even had his life flash before his eyes. Ridge responded “Yes, I have,” and Eric said that this could be the company’s very last showing if it doesn’t go well.

Outside in front of the runway, a reporter talked to the camera about how buyers had already purchased their spring lines and might not take this showing seriously. Stephanie Forrester (Susan Flannery) talked to another reporter nearby, saying that the lateness of the show was a concern, but that it was also a blessing in disguise because Forrester Creations had produced the most innovative line in the history of the company. After the reporter left, Stephanie looked worried.

In the line to get into the fashion show, Sally Spectra (Darlene Conley) and Lauren Fenmore (Tracey E. Bregman) wore wigs and dark sunglasses so they wouldn’t be recognized. Neither woman had the proper ticket to enter the fashion show, so Sally pretended that someone stole her purse, and she and Lauren caused a scene. Ultimately, the ticket taker took pity on Sally and Lauren and let them enter the show.

Backstage, Eric rallied the troops, saying that he’d heard that Forrester Creations was finished and that they’d never pull this off. “They’re right, it’s impossible,” Eric said, “But that’s our specialty,” Eric asked the models to go dazzle the crowd with their magic. “Let’s show them the magic of Forrester ’98!”

The fashion show started, with the first models walking the runway. The crowd just sat there as the models walked by with boring suits on. Sally and Lauren looked around. “Well, this is interesting,” Sally said. “Nobody seems terribly impressed.” Sally said this was a historic moment, and that it could be the beginning of the end for Forrester Creations.

More models came down the runway, still in boring suits, and the crowd didn’t react. Sally gushed that there was no reaction to this group, either. “What a flop,” Sally said to Lauren. “Take that you wicked Queen Stephanie.” Sally thought that Stephanie seemed to be down for the count, and that this might put a strain on her marriage to Eric leaving Eric free for Lauren.

Backstage, Eric lamented over the first group of models flopping. Thorne Forrester (Winsor Harmon) watched anxiously, and Eric went outside to observe the crowd. He shared a worried look with Stephanie, who was also outside at the show looking over the audience. Brooke Forrester (Katherine Kelly Lang) and Ridge appeared, unhappily watching the crowd, too.

Ridge and Brooke took off and walked up some cobblestone stairs. Brooke tried to reassure Ridge that it wasn’t over just yet, but Ridge noted that they still weren’t hearing any applause and that Forrester Creations might not come back from this. From afar, Thorne watched Brooke and Ridge talk.

Ridge told Brooke that he never thought this would happen and that Brooke stood to lose as much as any of them. “My half of the company, fame, social status,” Brooke said. “But you know, I never needed any of that to make me happy. Neither do you.” Brooke said that the joyful moments in her life had been about love, not money and that they’ll never lose that.

More models came down the runway, in much more exciting designs. The lady sitting next to Sally perked up, much to Sally’s chagrin. The crowd slowly started to buzz and applaud, which Stephanie and Eric noticed from their vantage point. Everyone in the crowd was applauding at this point, except for Sally and Lauren. More models came out, and the cheers got louder. Even Lauren clapped, which irked Sally.

More models emerged in beautiful gowns, which the crowd absolutely loved. Ridge and Brooke reappeared on the scene and smiled, alongside Stephanie and Eric. Finally, the last model took the runway, with the crowd going wild. The crowd stood and applauded, while Sally and Lauren looked miserable.

Eric and Stephanie then took the runway for the applause, followed by Ridge, Brooke, Thorne, and some other people on the Forrester Creations team. Sally got up and left, while Lauren stayed in her seat looking unhappy.

After the episode, John McCook returned and said that it was quite a time to be a Forrester. John said that he was so thankful to all of the fans, and he thanked everyone for celebrating all of B&B’s iconic fashion moments this week on the show. “See you this week and stay safe,” John said.

That was a fantastic encore episode of B&B, and there’s plenty more coming up on B&B’s special “Fashion Week.” Look for another great classic episode tomorrow! Keep up with the CBS soap and we’ll be here for you with the latest B&B updates. We’ve got your soap news, so stick with us!