The Bold and the Beautiful Spoilers: Penny Is Sally’s Servant, Risks Everything For The Chance To Design For Forrester 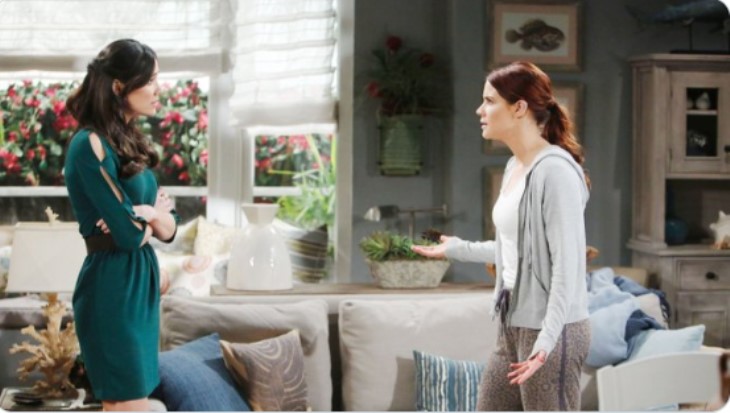 CBS The Bold and the Beautiful spoilers and updates suggest that Dr. Penny Escobar (Monica Ruiz) is Sally Spectra’s (Courtney Hope) servant. She follows orders, doesn’t talk back, and is afraid of something. Penny isn’t risking her medical license and freedom just for a career change. Sally has leverage and it must be something huge, but is Penny hiding?

B&B spoilers reveal Penny is the doctor, but Sally dominates the discussions and decisions. Penny freaks out a lot and she’s not the one who is scheming. She follows orders, is “allowed” to back out, and puts up with Sally snapping, screaming, and insulting her. At first, it was believed that Penny had extreme anxiety and low self-esteem. But after seeing her have zero hesitation when brain-bashing Flo Fulton (Katrina Bowden), it’s clear that there is something bigger going on.

The Bold and the Beautiful spoilers painted Penny a weak woman in the beginning. She shriveled up when Sally would get angry. Her eyebrows were always raised when dealing with Sally, like someone who was worried or afraid. Despite wanting to abandon the scheme, Sally would intimate Penny with her voice and gestures.

However, when Sally isn’t around or not going into a frantic, frenzied rage, Penny looks like a normal human. So, there is a reason why Penny is so fearful of upsetting Sally and the plan not working.

The Bold and the Beautiful Spoilers: Risks It All For Nothing (Literally)

It is highly unlikely that the deal has anything to do with Penny wanting to change careers. She could just send her designs to Forrester Creations… she doesn’t need Sally for that. She doesn’t need Sally to hold her hand while she switches jobs. It seems that Sally helped Penny with something illegal or scandalous. Then, she used it to force the doctor to help with the sickness scheme. Penny is risking everything for literally nothing.

5 Changes We Need To See In Hope Logan When New Episodes of The Bold and The Beautiful Resume!https://t.co/XpOutECh3t

She’s not getting Wyatt Spencer (Darin Brooks); that’s Sally’s goal. Penny’s the one that could lose her medical license, career, income, reputation, and freedom. Sally really isn’t risking that much and she’s making Penny do all the dirty work on top of it! There has to be a reason why and we just aren’t buying the career change story.

The Bold and the Beautiful spoilers suggest that Penny might have murdered someone and covered it up. Maybe it was a medical mistake or perhaps it was someone in her personal life. She might have an addiction to pills and be committing prescription fraud. Perhaps she got involved in scamming medical insurance companies. There are all kinds of things that Penny could have done.

We also think that Penny is new to the area. She and Sally seem to go way back, but Wyatt has never met her long-time friend? Penny is definitely running from something and eventually, the past will catch up with her.