The Bold and the Beautiful Spoilers Next Week: Quinn Banished From Forrester Estate! Dumped and Homeless 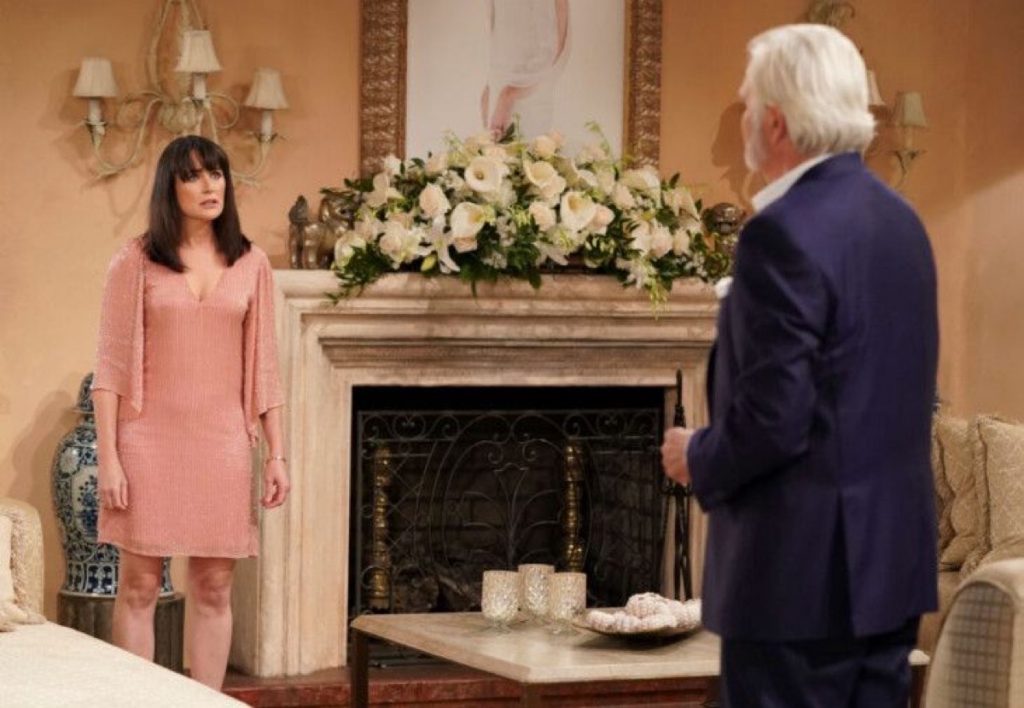 CBS The Bold and the Beautiful spoilers for the week of October 26 reveal that in Los Angeles Quinn Forrester (Rena Sofer) will pay the price for her latest scheme. Eric Forrester (John McCook) takes some time to think about his marriage. In the end, he banishes her from the Forrester Estate and leaves her homeless. She goes to a hotel, but that isn’t really working out either.

B&B spoilers reveal that Eric tried to figure out the best course of action when it came to his wife’s scheming. Even though he loves Quinn and has forgiven her many times before, this time is different. She tries to explain her point of view, but Eric isn’t having it.

She actually split up Ridge Forrester (Thorsten Kaye) and Brooke Logan Forrester (Katherine Kelly Lang). Quinn and Shauna Fulton (Denise Richards) impersonated Ridge to get his divorce filed, then got him extremely intoxicated. When he was too drunk to stand up, she had a friend of hers marry them in a quickie wedding chapel. Then, Quinn had to rub Brooke’s nose in it by planning a second wedding. It is just too much for Eric to forgive.

Eric will make a decision about his marriage. According to the new issue of Soap Opera Digest, he bans Quinn from the Forrester estate and basically makes her homeless. He doesn’t care where she goes, but she is no longer going to stay in his home.

Hotel Not Working Out

The Bold and the Beautiful spoilers reveal that Quinn ends up going to a hotel. However, she isn’t happy there. So, she goes to see Wyatt Spencer (Darin Brooks) and Flo Fulton (Katrina Bowden). She doesn’t want to stay at a hotel anymore, but can’t tell them that. So, she manipulates and schemes her own son and future daughter-in-law.

The Bold and the Beautiful Spoilers: The Guilt Trip

Quinn ends up giving Wyatt and Flo a guilt trip. She keeps wondering out loud if the hotel will be “okay.” Then, she admits that it is “so lonely” being there by herself. Now, Wyatt knows exactly what his mother is doing.

However, Flo falls for it despite Wyatt trying to give her signs to say no. In fact, he gets behind Quinn and tries to make it obvious through comedic facial expressions, mouthing words and waving his hands all around. However, Quinn’s pulling on Flo’s heartstrings and there’s a good chance her scheme will work.