The Bold And The Beautiful Spoilers: Carter Makes Proposition, But Zoe Captivated By Someone Else? 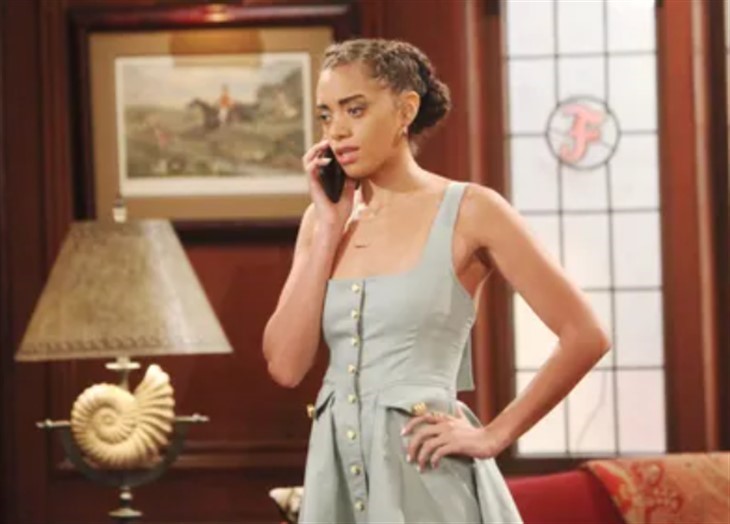 The Bold and the Beautiful spoilers for the week of October 12 reveal that Carter Walton (Lawrence Saint-Victor) will decide to take his relationship up a notch. He proposes that he and go to the next level. However, she could end up being captivated by someone else, making her question if Carter is really the man of her dreams.

The Bold And The Beautiful Spoilers  – Carter Walton’s Proposition

B&B spoilers for the week of October 12 reveal that Carter will decide that it’s time to move things along with Zoe. Even though they do seem to be having a fast romance, he asked her if it was going too quickly. Zoe told him no, that the pace was just perfect. So, he will make a proposition that they take their romance to the next level.

Meanwhile, Zende Forrester (Delon de Metz) returns and meets with Eric Forrester (John McCook). He will also begin competing with Thomas Forrester (Matthew Atkinson). In a sneak peek photo, we see Zoe wearing a fashion designer and she is grinning widely. We have to wonder if this smile is for Zende because we never see her smile that big for Carter.

In a previous issue of Soap Opera Digest, executive producer, and head writer Bradley Bell said Zende would turn heads when he came back. Bell said that one of the women to notice Zende would be Zoe.

The Bold And The Beautiful Spoilers – Zoe Buckingham Captivated?

The Bold and the Beautiful spoilers reveal that Zoe might be captivated by Zende. Will it interfere with Carter’s plans to take things to the next level with Zoe? Or will she simply claim that she’s not ready while drooling over Zende? We hope that she will be honest with Carter, even though it might hurt him. He’s a good guy and at the very least, deserves someone who will be totally up front with him.

B&B Spoilers – What About Paris Buckingham?

We are also going to meet Zoe’s sister, Paris Buckingham (Diamond White). Could the newcomer end up interfering in both Zoe’s relationships? Will she just want Carter or Zende (or both) simply because Zoe is interested in them? It wouldn’t be the first time that siblings compete for the same men. We will have to keep watching the CBS soap opera to see what happens with this storyline.

The Bold And The Beautiful Spoilers: Eric Busts Quinn And Shauna