‘The Bold And The Beautiful’ Spoilers: Bill Tells Brooke The Truth – Ridge Takes Bridge For Granted 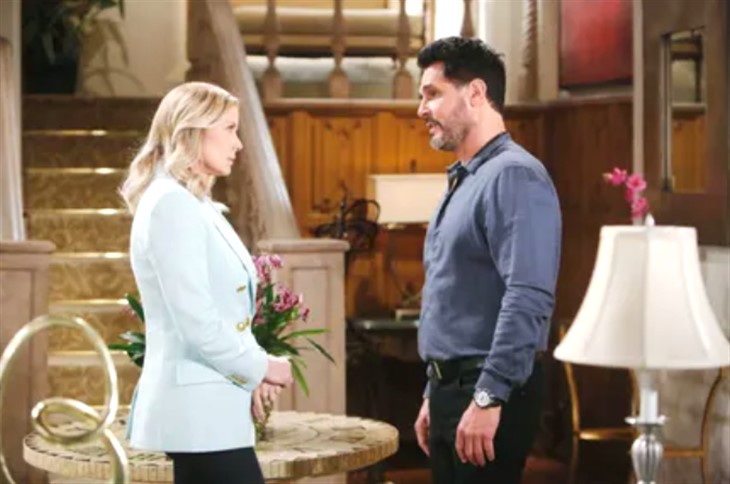 The Bold and the Beautiful spoilers document that Brooke Logan (Katherine Kelly Lang) has to admit that Bill Spencer (Don Diamont) is basically right. His assessment on Ridge Forrester (Thorsten Kaye) is surely self-serving, but it’s also a fair tag.

Bill thought all was lost until Quinn Fuller Forrester (Rena Sofer) told him that Bridge had another confrontation that led to Shauna Forrester (Denise Richards) being with Ridge on the second floor at Eric Forrester’s (John McCook) estate. That visual made Bill curious and led to him re-pledging his love for Brooke.

The Bold And The Beautiful Spoilers – Nipping Too Much California Nectar

Ridge has gotten drunk on two different occasions in response to verbal falling outs that he had with Brooke. In the first instance, he passed out and was helped by Shauna into an earlier second-floor location at Bikini Bar.

In the second scenario, Ridge’s drinking happened in Las Vegas, Nevada. And Bill, along with Brooke, don’t even know the full story of how out of it Ridge was, and being in that state led to a faked divorce request and a sham marriage ceremony on the strip.

Katie Logan (Heather Tom) is right. She knows that Bill loves her and his devotion to Will Spencer (Finnegan George) is real. But he does love Brooke more than Katie and that’s long been the problem for Batie.

Bill had to admit to himself that Katie’s assessment was on the mark. That, along with Quinn’s prodding, sent him back to Brooke. After Donna Logan (Jennifer Gareis) left the room, Bill told Brooke that she needed to wake up.

How can Brooke deny that Ridge has treated her badly, by literally flying off to Vegas and getting divorced and married to another woman in what was a tremendous overreaction? She can’t.

The Bold And The Beautiful Spoilers – Brooke Logan Takes Trip Back To Future?

Brooke doesn’t love Bill more than Ridge. B&B fans also recognize that it’s fair to claim that Ridge loves Brooke more than any other woman, past, or present, certainly including Shauna.

However, Ridge has made his decision clear. Bridge is over and Shauna is his wife. So, why not give Bill a chance to prove himself?

‘The Bold And The Beautiful’ Spoilers: Brooke Puts Quinn On Notice – How Long Until Victory Is Reversed?https://t.co/lQqA1CStwo

Bill has his foibles and being with him would surely rile Ridge. The second point is likely to play some part in Brooke’s choice if she does reignite Brill. But this man loves her too and that’s at least enough to consider another pairing with him on B&B.

Eastenders Spoilers: Sharon Brought Back To Agony Of Dennis’ Death Is Investigation Ends