The Bold And The Beautiful (B&B) Spoilers: Hope Corners Steffy And Liam – Demands To Know What They Are Hiding 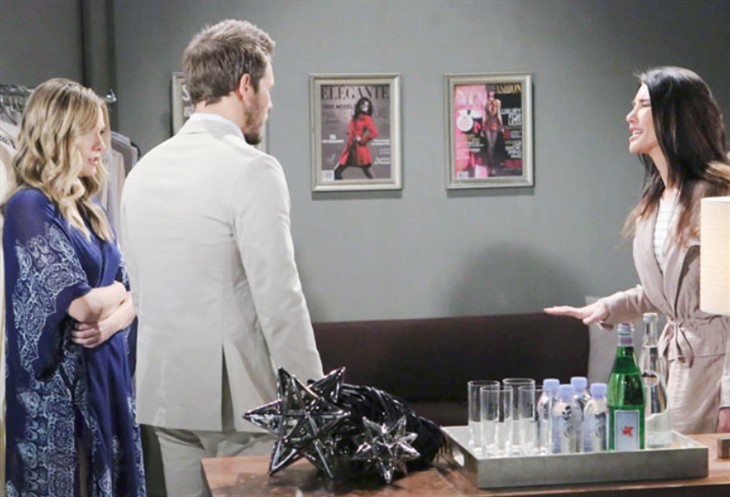 The Bold and the Beautiful (B&B) spoilers tease that in Los Angeles Hope Logan (Annika Noelle) will corner Steffy Forrester (Jacqueline MacInnes Wood) and Liam Spencer (Scott Clifton) during the week of December 28. She will demand that the former married couple come clean about whatever they are hiding.

It’s clear that the secret is weighing heavily on the minds of Steffy and Liam, but will they come clean? And, if they do, how will Hope react?

After they spent the night together, Steffy was adamant that they should stay quiet about their hook up. B&B spoilers suggest that even though Steffy told Liam that they should never tell anyone, this dirty secret is weighing heavily on her mind.

On Tuesday, December 22, Dr. John Finnegan (Tanner Novlan) doted on Steffy, saying that she is an honest woman. The comment made her very uncomfortable, as she is hiding this big secret that could implode her family.

Then, on Wednesday, December 23, Hope asked Steffy if she was falling for Finn. Hope confessed that she feels relieved that she has a man in her life so she can finally move on from Liam.

B&B spoilers revealed that Liam interrupts the women, and he asks what they are talking about. Of course, when Hope explains Steffy and Liam look uncomfortable as if they have something to hide.

The Bold And The Beautiful Spoilers: Bill Spencer’s Story In 2021, Don Diamont Teases What’s Next

The Bold and the Beautiful spoilers state that next week, Hope will corner her husband and Steffy about something that they seem to be hiding from her. She assures them that whatever it is, they can trust her with it.

Liam is on the edge as his infidelity is eating him alive. He cannot keep this from his wife anymore. B&B spoilers state that Steffy doesn’t think it is a good idea, as it will implode both of their lives.

When Hope corners Steffy and Liam, they will have to come up with a secret and lie to her or come clean. Since Bold and the Beautiful is weeks away from sweep month, it’s likely that they will drag this out for a few more weeks.

Before the storyline is over, B&B fans expect that Steffy will be pregnant and not know which man is the baby’s father. It sounds like the Bold and the Beautiful viewers should buckle up because it doesn’t sound like the truth will come out just yet.

Do you think Liam and Steffy will tell Hope the truth? Don’t forget to come back later for more The Bold and the Beautiful (B&B) spoilers, news, and casting updates!