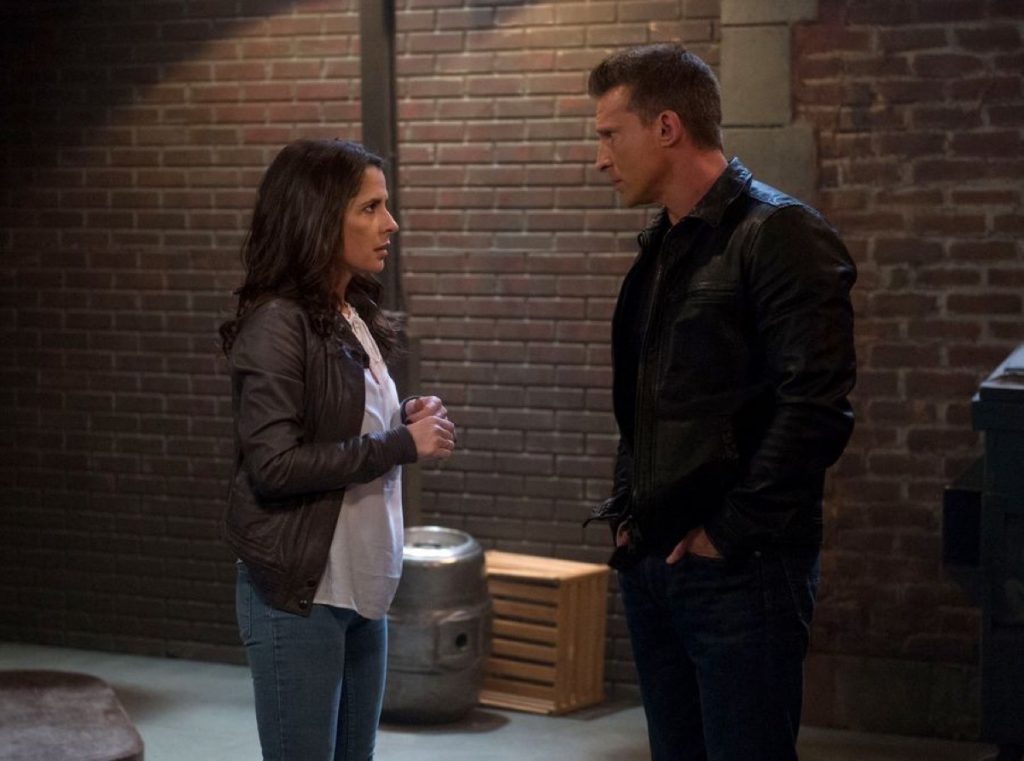 General Hospital spoilers tease that Sam McCall’s (Kelly Monaco) alone time with Jason Morgan (Steve Burton) will once again be interrupted by “Sonny Corinthos (Maurice Benard) business!” Sam is rapidly losing patience and reconsidering whether the mob wife life is worth it!

Sam has been thinking a lot about the safety of herself and her children since the scare at the Floating Rib. Even her mother, who hasn’t been thinking a whole lot about her own safety lately, has reminded Sam of Jason’s dangerous lifestyle. When she was younger, and she wasn’t a mother with children to think about, Sam enjoyed the danger and the risk taking.

But when she knew there had been a definite possibility that not only Jason, but Danny, may have been killed in the explosion, it got to her. Fortunately, they weren’t, but when all she had to go on was Danny’s ball cap that Julian Jerome (William DeVry) had found outside the destruction, it was a different story! And, it’s not just safety issues that have got Sam in a tizzy – Jason didn’t think to call her that he and Danny were safe.

So his cell phone had run down? Couldn’t he have borrowed someone’s phone to make a call? It’s like Sam isn’t Jason’s priority anymore, and she is rapidly losing patience and getting tired of it! She thinks of all those months she and Jason had to meet on the sneak when she still had Delores Maloney (Andi Chapman) as her parole officer. Now, Jason and Sam can live together and live their lives freely, and he’s never there!

GH Spoilers – All Of It Together Is Taking A Toll, And Now Sonny Business Interrupts Again!

She talked with Carly Corinthos (Laura Wright) about her fears for her family, and both wondered if it was time to go to Sonny’s private island for safety again. It is very disruptive to the life of a child, to have to hide out frequently with his or her parents. Plus it’s the school year and Danny is in school. Carly talked about when she sent Morgan Corinthos (Bryan Craig) to a private school for that very reason. But Carly never saw Morgan very much when he was growing up because of the private schooling – and Sam doesn’t like that idea at all where Danny and her daughter Scout Cain (Ella Ramacieri) are concerned.

Scout already lost her dad – even though she was very young at the time, and doesn’t remember him too well, Sam certainly doesn’t want her to lose her mom! It has been a long time since a mob war broke out in Port Charles, and Sam and Carly had both gotten used to comparative peace. She and Jason make some time to be together alone, being relieved that at least he and Danny had some time together playing a board game earlier. She had made a tough decision to demand more time with Jason, and he is trying to comply with her wishes.

He explains with the threat from Cyrus Renault (Jeff Kober) and his knowledge that he was the target of the bomb at the Floating Rib, it’s no time to leave the mob for either him or Sonny! But for now, they are in a safe place, and they start to work on THEM. But once again, Jason’s phone rings, and “Sonny business” has to be a priority! Sam isn’t sure how much more she can take – between danger and distraction of Jason by “the business” she feels like she’s left out in the cold and fearful as well!

Are 90 Day Fiancé Rebecca And Zied Still Together?