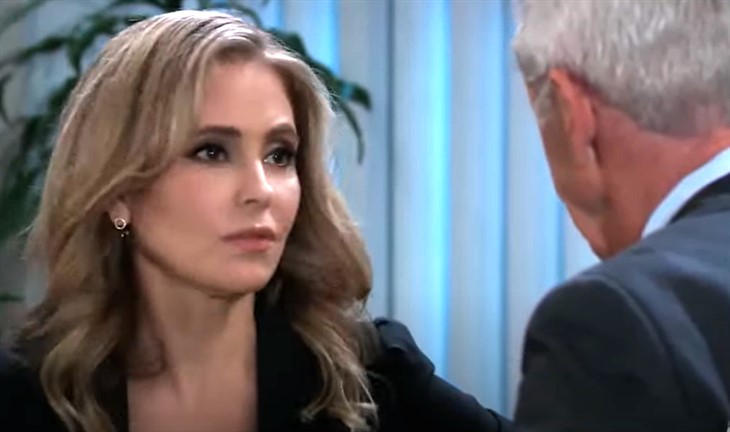 ABC General Hospital spoilers tease that Robert Scorpio (Tristan Rogers) and Olivia Falconeri (Lisa LoCicero) will continue to have an emotional overseas trip. The first stop at the WSB facility in Geneva didn’t go as Olivia had hoped. As viewers know, Olivia had hoped to reconnect with her long-absent son, Dante Falconeri (Dominic Zomprogna).

Dante voluntarily checked himself into the WSB facility last year after realizing that his PTSD might cause him to inadvertently hurt someone he loves. Only recently, Dante has committed to doing the work needed to free himself from whatever programming is locked away in his mind. He just doesn’t feel that he’s ready to see anyone he loves until he can do so free and clear without hurting his family. So he refused to see his mother.

General Hospital Spoilers: 3 Reasons Why TJ Breaks Up With Molly

Of course, this devastated Olivia. But fortunately, Robert was there to make sure Olivia knew that her trip wasn’t for nothing. Dante now knew that his mother was waiting for him, and her words will only encourage Dante to get the treatment he needs and come home. This was obviously a great comfort to Olivia.

The next stop on their overseas will likely see Olivia and Robert reverse roles as it will be time for Olivia to help Robert get through the memorial service for his ex, Holly Sutton (Emma Samms). Holly was presumed dead when the ship she was on sunk. Nobody was recovered and Robert refused to believe that Holly was gone. He initially refused to go to the service, but Anna DeVane (Finola Hughes) convinced Robert that he needed to go and get some closure. The memorial is likely to be as devastating for Robert as Dante’s rejection was for Olivia. Olivia will be there for Robert just as he was for her. But will their mutual sorrow lead to something unexpected?

The kind of pain that both Olivia and Robert are both going through could easily lead to passion. Perhaps a kiss, or will they go even further and make love? Olivia is married to Ned Quartermaine (Wally Kurth), but the two are having problems because

Ned is seemingly more concerned with ELQ than his own family. If Robert and Olivia do make, they are both likely to regret it immediately. This will likely lead to Olivia to make up with Ned and recommit to their marriage. But will lingering feelings between Robert and Olivia drive a permanent wedge between Ned and Olivia?

GH Spoilers – What Will happen?

Will Holly’s memorial push Robert and Olivia into passion? Could this be the start of a new romance or will they regret their impulsive behavior? Can Olivia and Ned’s marriage be salvaged or will this be the final nail in its coffin?

’90 Day Fiance – The Other Way’: Fans Feel Sympathy For Sumit’s Ex-Wife And Accuse Jenny Of Lying

The Bold And The Beautiful Spoilers: Can Finn Make Steffy See Clearly, Liam Her Root Problem