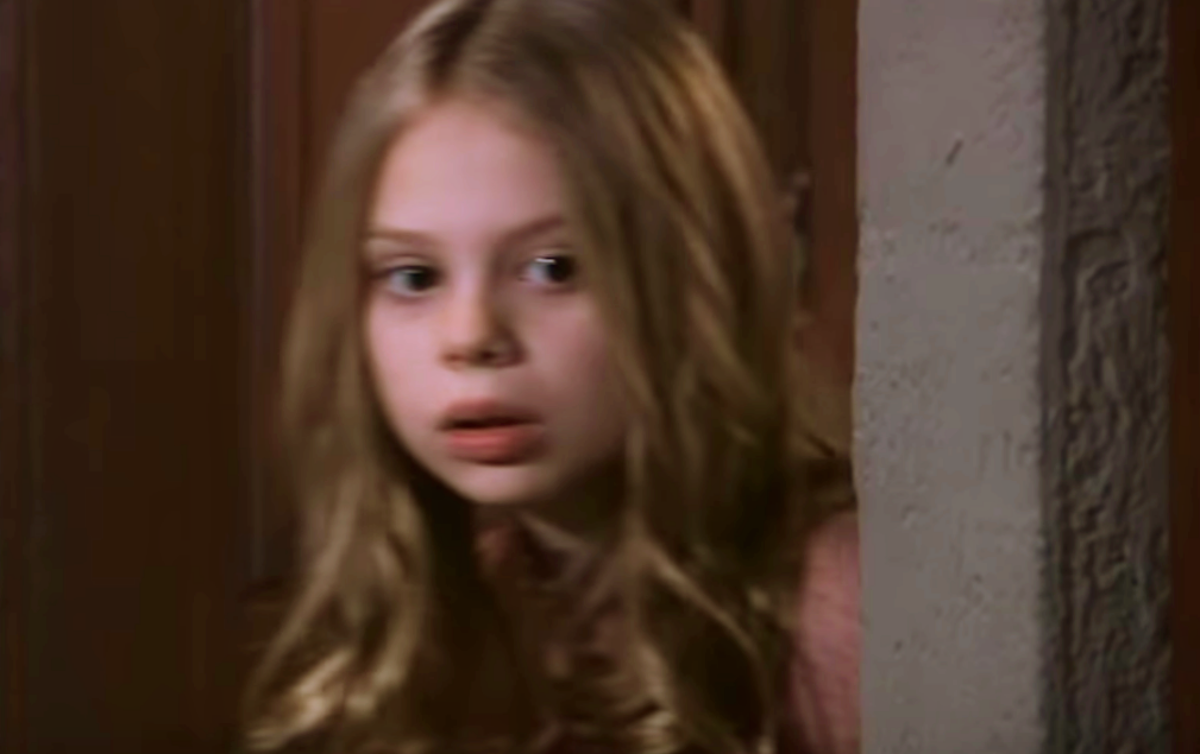 General Hospital spoilers tease that Charlotte Cassadine (Scarlett Fernandez) is having some severe emotional problems and acting out, and will sense tension between her parents which only makes things worse in an upcoming episode of GH!

GH Spoilers: Charlotte Cassadine Has Seen And Heard Too Much She Can’t Unsee And Can’t Unhear

Poor little Charlotte has simply seen and heard too much she can’t unsee and can’t unhear, and it is affecting her sense of security and being loved – and she is lashing out at the people that she thinks are at fault.

The first time her daddy, or “Papa” as she calls him, Valentin Cassadine’s (James Patrick Stuart) wedding to Nina Reeves (Cynthia Watros) fell apart, it seemed to be the fault of Sasha Gilmore (Sofia Mattsson) who had been pretending to be Nina’s long-lost daughter for around a year – and then she just suddenly confessed that she wasn’t and the whole thing blew apart. Nina rejected Sasha, who Charlotte had gotten attached too, and broke up with her papa.

Of course, she doesn’t realize that Papa had engineered the whole thing, but Sasha refused to blame him. Then she overheard her birth mother, Lulu Spencer (Emme Rylan) threaten Papa with a restraining order keeping him from seeing Charlotte, and she cut up a photo of Sasha in Nina’s office and blamed Nina for it when Lulu noticed. Then when Papa and Nina were getting ready to marry again, she saw her “bodyguard” and uncle Nikolas Cassadine (Marcus Coloma) bring a soaking wet Ava Jerome (Maura West) into the wedding after she saw Papa on the parapet and heard a splash, and now Nina broke up with Papa again and he even got arrested! No wonder she’s so upset!

Charlotte thinks her Papa Valentin hung the moon – and she can’t handle hearing people talking bad about him or accusing him of doing bad things, and Charlotte, Lulu and Valentin will be in Kelly’s and she will feel tension between Lulu and Papa. She won’t be able to handle it.

Then she sees someone else she knows – Aiden Webber’s (Jason David) parents at another table at Kelly’s. She sees that Aiden’s stepdad is drawing a picture – of Ava! Franco Baldwin (Roger Howarth) is probably just giving some sketches a trial run off the selfie Ava took on his phone to go by for the portrait she’s commissioned him to paint of her. As Franco and Elizabeth Baldwin (Rebecca Herbst) are distracted doing something else, she acts out again; she is probably angry at Ava because she thinks that Ava falsely accused her papa of throwing her off the parapet, even though Charlotte herself may have seen him do it, and she destroys Franco’s sketch!

General Hospital fans can only hope for Charlotte’s sake that Franco, who does art therapy with children, will see the signs of a deeply disturbed child and address it with her mother – if Lulu will even listen! Like her brother Nikolas was, she’s too full of rage and revenge against Valentin to see what’s really going on with her child!

Days of Our Lives Spoilers: Chad and Abby Get Trapped Inside Princess Gina’s Lair – Shawn Tries to Get Through to His Mother

The Bold and The Beautiful Spoilers: Is Douglas Losing Another Parent? Thomas Seems To Thinks So