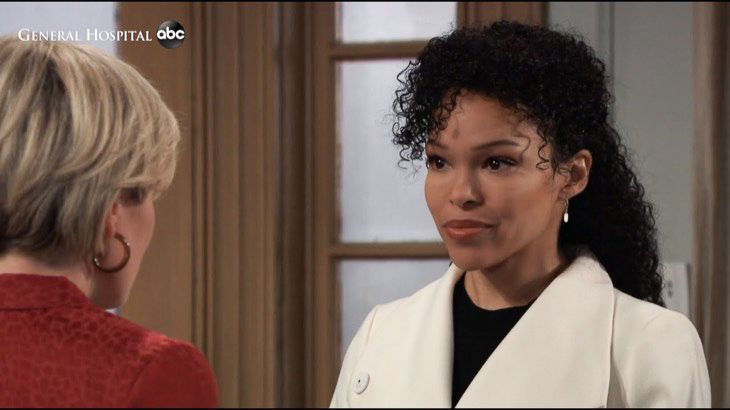 ABC General Hospital spoilers and updates reveal that a couple of fussing and feuding Port Charles women are giving viewers a bang-up performance as enemies fighting over one of the character’s daughter. Fans are giving their emotionally charged interactions a big thumbs up, and one of the actresses is speaking out about her recent arrival to GH and relationship with her on-screen enemy.

Portia Robinson (Brook Kerr) is the newbie to GH and she’s been dragging Maura West’s character Ava Jerome from day one.

Kerr spoke to Soap Opera Digest about her new role and by the sound of it, she’s been loving every minute she gets to act opposite West.

General Hospital Spoilers: Who Will Save Sasha?

Ava fans might be surprised but certainly delighted to hear that Kerr can’t help but see the sympathetic side of the misery loving Ms. Jerome. Of West, she said, “she has this wonderful way of playing the character where we’re on her side.”

She went on to praise West saying, “I love working with her because she makes me feel for her.” As Kerr notes, “it’s a real talent to be able to play someone so sinister and still make you like her.”

Kerr noted that there are reasons why her character does not want Ava to interact with or even be around her daughter Trina Robinson (Sydney Mikayla). Ava was arguably a horrible mother to her own daughter and did unspeakable things to innocent people. Although today she runs an art gallery, in the past she was a mobster as part of the infamous Jerome family.

It is Portia’s fear for her daughter that is bringing out her protective streak and animosity toward Ava. And this stance is something that fans can relate to, serving to make the tense dynamic unfolding onscreen all the more real.

At this time the soap is airing encore episodes until production can resume, so the war between Ava and Portia is at a standstill.

What will happen when the show returns with new episodes?

It’s unlikely that the animosity between the two women will end anytime soon, there is too much vitriol coming from Portia, all in the effort to keep her daughter safe from a person she views as evil incarnate.

Be sure to tune in to see how the battle progresses between Ava and Portia!

What The Royals Have To Say About Their Mental Health Issues