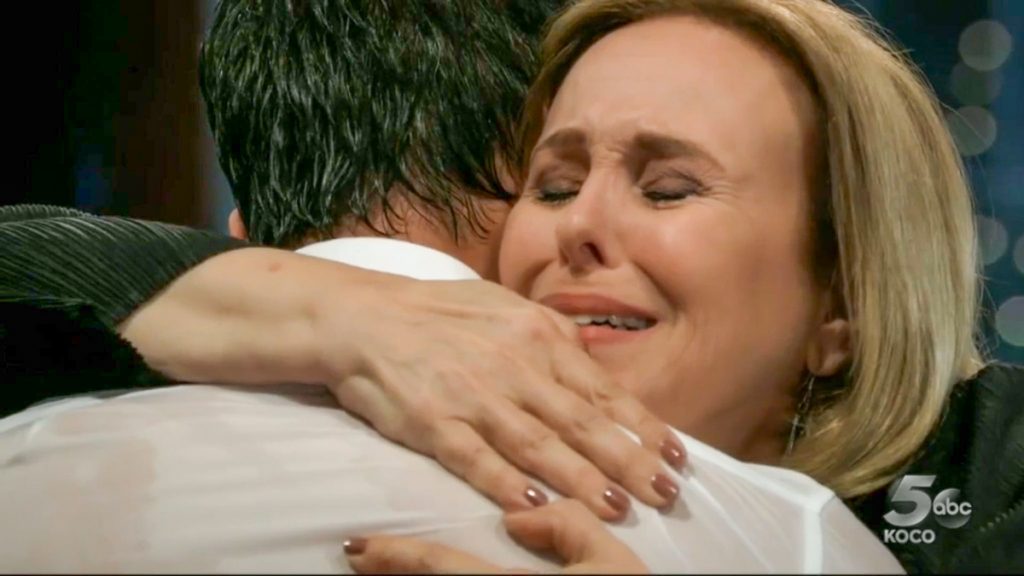 Welcome to your Monday January 6th General Hospital (GH) recap! We begin our day at Wyndemere Castle where Nikolas Cassadine (Marcus Coloma) busts into the wedding, soaking wet. As everyone looks on shocked, he has an unconscious Ava Jerome (Maura West) in his arms. Curtis Ashford (Donnell Turner) grabs Ava while Laura Webber (Genie Francis) runs into her son’s arms.

In the Corinthos mansion kitchen, Dev Cerci (Ashton Arbab) wishes Josslyn Jax (Eden McCoy) a happy new year in Turkish. She gives him a new years gift of a lottery ticket and a pair of boxers.

In the Port Charles park, Trina Robinson (Sydney Mikayla) approaches Cameron Webber (James Lipton) and wishes him a happy new year. She says it’s a new year and they should be happy, tho he doesn’t seem to be.

Crying and trembling. Laura hugs her son as his sister Lulu Spencer (Emme Rylan) looks on with tears in her eyes. Lulu turns to Valentin and screams at him that he was probably behind this! Valentin says Nikolas looks pretty healthy to him and Ava chimes in that he pushed her off the wall.

Nikolas yells at Valentin that hes not getting away with this – “you lose everything!” Nikolas tells Valentin and everyone else that he has the codicil and the entire castle and fortune belongs to him. Nikolas says to Valentin that he not actually a real Cassadine, he’s not Mikos son at all – only Helena’s.

Nikolas continues to call Valentin a bastard child as everyone, including Nina Reeves (Cynthia Watros) looks on, stunned. Valentin calls him a bastard who should crawl under the rock he came from.

After going ice skating, Cameron Webber (James Lipton) asks Trian where Joss and Dev are? He wonders if they are together and she calls him out on being in love with Joss, he swears hes not.

Cameron says he thought Trina liked Dev, but she says shes moved on after he did not seem interested. Trina admits that she told Joss that Dev likes her more than a friend.

They mess up smashing the pomegranate and end up kissing in the kitchen. He recoils and she says shes embarrassed and he does not want to disrespect her family.

Peter finds Charlotte’s stuffed horse toy and tries to comfort her. She’s wondering what is happening downstairs at the wedding as Peter says theres nothing they can do about bad things.

Maxie says shes shocked about Nikolas and Lulu finding out her brother is alive.

Nina confronts Valentin and says she knew it was him all along who messed with the DNA.

Trina asks Cameron if he will go with her to the mid year dance if no one else asks them. Dev and Joss arrive and they all go ice skating together.

Ava screams that Jordan should arrest Valentin for attempted murder.

Nikolas explains to his mom and sister what happened when he was “shot” and went out the window into the sea. Laura is furious that he has been keeping this huge secret from them all.

Ava enters the room and has a bombshell, her and Nikolas are getting married tonight!…….flash to preview

The Bold and the Beautiful Spoilers: Liam Has A Plan For His Future With Hope – But With Strings Attached