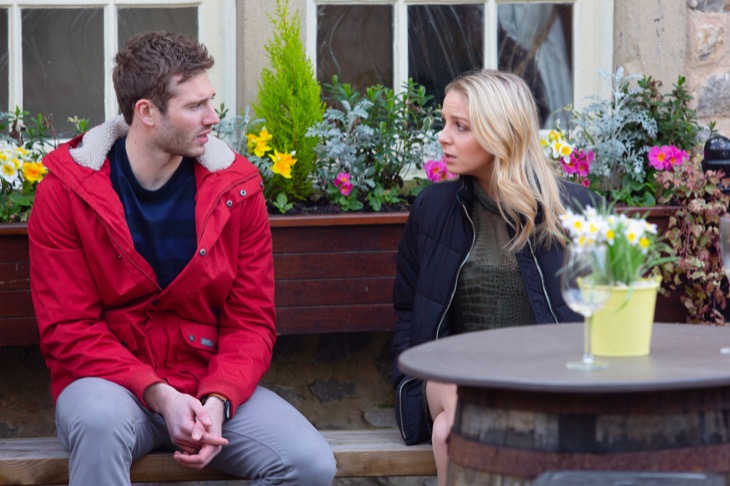 On “Emmerdale,” Belle Dingle (Eden Taylor-Draper) and Jamie Tate (Alexander Lincoln) face a crossroad after the latter revealed that he’s been having problems at home because of his feelings for her. What’s their next move now that it seems like they have deeper feelings for each other?

Belle and Jamie’s affair has been one of the sudser’s main storylines this year. But whatever they have now won’t last given that they’re both in a relationship. Jamie is married to Andrea Tate (Anna Nightingale) while Belle is with Ellis Chapman (Aaron Anthony).

The pair’s latest encounter was a fiery one. They exchanged some harsh words at first, which was triggered when Belle learned from Paddy Kirk (Dominic Brunt) that she may lose her job as a receptionist.

Viewers may recall that Paddy agreed to Jamie’s suggestion to let Belle go so they could cut costs. Belle’s job as a receptionist at the surgery hangs on the balance and she’s furious when she found out that her contract might not be renewed thanks to Jamie’s plan.

Belle realized that it’s all Jamie’s doing and she decided to confront him. The latter defended himself and insisted that it’s best for everyone if she leaves. He even tried to buy her out by offering her four month’s pay but Belle didn’t want any of that.

His offer enraged her even more and she retaliated by threatening to tell Andrea everything. He then changed his strategy and started telling Belle that he’s having problems at home with Andrea because of his feelings for her.

Belle is caught off guard when Jaime admitted that he wanted her gone so he won’t be tempted by her. She confessed that she wanted to be with him but she knows they can’t be together.

“So you’re going to settle for a loveless marriage and teach Millie that it’s OK to live a lie. You’re not going to leave her, are you? OK, then you’ve made your decision,” Belle said.

“I think it’s the wrong one but I respect it. I’ll be professional, I won’t get wound up when I see you two together because even though I can’t have you I know how you really feel,” Belle continued.

Emmerdale Spoilers: Aaron Pushed In The Middle Of DI Malone Drama – Will This Push Cain Into Taking DI Malone Down? https://t.co/pmsyoVxlVg pic.twitter.com/i8tCRE7OWa

“You go back to your life, I’ll go back to Ellis and we’ll try to make it work,” she added.

Jamie replied that he can’t and that’s why he needed to be strong and let her go. With her gone, he no longer has to wish that it was her he’s going home to.

One thing led to another and they both ended up sleeping together again.

“Emmerdale” spoilers hint that Jamie will promise to leave Andrea for Belle. Is Jamie serious about what he said or is he just saying whatever it is that Belle wants to hear?

The Bold and the Beautiful Spoilers: Katie Confronts Quinn – Furious Over Being Humiliated

General Hospital Spoilers: Catching Up With Billy Miller – Soap Comeback In The Works?