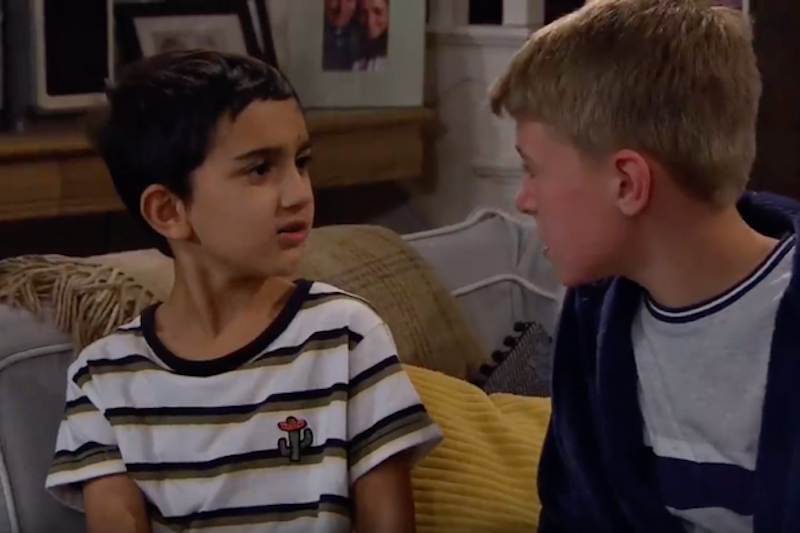 Emmerdale spoilers reveal fans are upset over a bullying storyline on the soap. For the past several weeks, we watched as young Archie Breckle (Kai Assi) was relentlessly bullied by Arthur Thomas (Alfie Clarke). Now, the tables have turned and the victim blamed the bully for bruises that this time, weren’t caused by him. Fans are outraged with one calling the child “Satan in the making.”

After his mother died, Archie came to live with his estranged father, Jai Sharma (Chris Bisson). However, the transition wasn’t easy for the young boy. At first, he wouldn’t speak and was traumatized by recent events. Eventually, he did start talking, but then had to endure bullying from Arthur. Afraid to tell the real reason for his injuries, he blamed someone else, which opened up a big can of worms.

Emmerdale spoilers teased that Arthur would feel guilty after his grandfather died. He blamed himself and thought he was being punished for his bad behavior. That is when the truth finally came out about what he had done to Arthur. However, Laurel Thomas (Charlotte Bellamy) didn’t want to tell Jai because he was in rehab. She worried that a revelation like that could jeopardize his sobriety.

During a recent episode, a cabinet fell on Archie and he ended up in bruises. When he was asked what happened to him, Archie said something surprising. He turned the tables on the bully and blamed him, even though he was innocent.

Later, Archie went a step further by mocking Arthur and telling him that all he has to do is blame him and he’ll be sent away forever.

Emmerdale Spoilers: Archie Gets His Revenge But Will It Backfire? https://t.co/zwzsuWa7ny pic.twitter.com/IGs1dCDVtH

Emmerdale spoilers reveal Laurel is sending Arthur to counseling, but doesn’t realize the gravity of the situation. She calls it “being a little naughty.” Fans are upset about that, as well as turning the bully into the victim. On Twitter, one fan wrote,

“#Emmerdale Arthur is not sorry. Laurel, he is Satan [sic] in the making… Jai, you need to dump Laurel NOW.”

What do you think of Archie turning the tables on Arthur? Do you think he is justified considering the level of abuse he received? Or does this storyline not sit right with you?