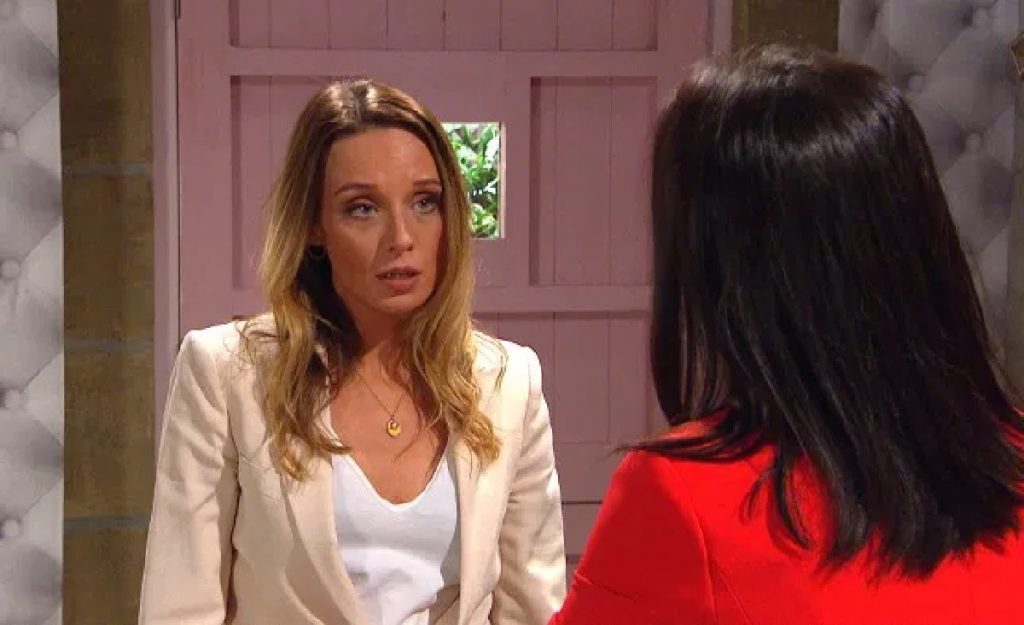 Emmerdale spoilers reveal that Andrea Tate (Anna Nightingale) and her young daughter are “kidnapped.” However, it is most likely a revenge scheme. Both Jamie Tate (Alexander Lincoln) and Belle Dingle (Eden Taylor-Draper) will be prime suspects. Will they end up turning on the other and pointing the finger when interrogated by the police?

For months, Jamie has been romantically involved with Belle, despite still being married to Andrea. He even lied to his wife about his whereabouts, but she eventually discovered the truth. Once she did, Andrea cried to Leyla Harding (Roxy Shahidi). Then, she later decided to seek revenge, which she will get with Leyla’s help.

Emmerdale spoilers reveal that Jamie and Belle’s private text messages are publicly displayed during a pub quiz. Jamie instantly blames Belle for exposing their secret, especially after Andrea reacts just like a shocked wife would in that situation.

Not only does Belle get thrown under the bus by Jamie, but pretty much everyone else as well. But this won’t be the last of the cheating scandal fallout.

Next Friday, Jamie will be worried when Andrea and Millie Tate (Willow Bell) vanish without a trace. However, that concern turns to panic when it’s discovered that she took nothing with her — not her car, not her wallet, no money or cards, absolutely nothing.

Prince Harry and Meghan Markle Heading Into Full Blown Rebellion Against the Crown?https://t.co/o374dHAOk1

Of course, it is instantly believed that Jamie’s wife and daughter have been kidnapped. But this is just a little too convenient considering the timing of the revenge scheme.

Emmerdale Updates: From Lovers To Enemies? Both Blame Each Other

Obviously, now that everyone in the village knows about Jamie and Belle’s affair, they will be the prime suspects. However, they could blame each other. Jamie will point the finger at Belle, claiming she’s crazy enough to do it and bring up her mental health history.

However, Belle could throw Jamie under the bus by revealing how desperate he was to get rid of Andrea. But he wouldn’t harm his daughter, so where is Millie?

Of course, Jamie and Belle are probably both innocent of kidnapping. Is this just another branch of Andrea’s quest for revenge? Who will get blamed, what will she say when they are “found,” and what will happen next? Once the truth comes out, could Jamie use this to get full custody of his daughter? After all, what kind of mother plays this type of cruel game?