Days of Our Lives Weekly Updates: Sarah Mortified, Brady Insults Her After Sleeping With Her – Who’s The Daddy Plotline Coming! 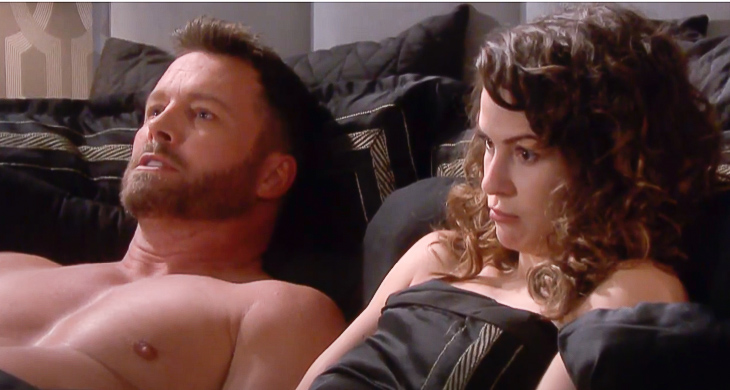 Days of Our Lives spoilers reveal that the extended promo shows Brady Black (Eric Martsolf) and Sarah Horton (Linsey Godfrey) end up sleeping together. However, that is not the most shocking scene. It is afterward when Brady seemingly makes reference to Sarah having all these flings while it’s “never happened” to Brady before. Keep reading to find out more!

DOOL spoilers reveal that Brady and Sarah have been faking a relationship. It was so Xander Cook Kiriakis (Paul Telfer) could hurt as much as Sarah hurts. However, Sarah had every opportunity to tell Maggie Horton Kiriakis (Suzanne Rogers) that it wasn’t a real romance. However, she didn’t and after being “offended” by her mother, Sarah decides to up the ante.

After Brady and Sarah sizzle in between the sheets, they both lay there in bed. It’s an awkward moment it seems from the extended promo that was uploaded to YouTube. Brady just happens to mention how this has “never happened” to him before. First of all, we all know that isn’t true!

Also, he is well aware that Sarah has slept around Salem. First, there was Rex Brady (Kyle Lowder), then Xander, Eric Brady (Greg Vaughan) came next, and now Brady. Three out of four of them are brothers, which makes it even crazier. After his insult — because that’s what it was — Sarah slinks down and has the guiltiest look on her face.

Days of Our Lives spoilers reveal that Sarah obviously regrets her actions. However, she started it as a way to get back at her mother. In Sarah’s mind, she wants to stick it to Maggie by flaunting her “affair” with Brady. Now, Maggie was just being the voice of reason, but Sarah had to get back at her like some entitled, spoiled teenager.

Days Of Our Lives Spoilers: Ciara Gets Her Way – Ben’s Best Man Is Will, Not Jake https://t.co/FA3cp5oZ98 pic.twitter.com/8FsEGadR4d

Days of Our Lives Spoilers: What Will Happen Next?

It is teased that Sarah will end up reconciling with Xander in the next few weeks. However, in soaps, affairs and one-night stands are never without consequences. Most often, they result in a pregnancy. The question is, will the baby belong to Xander or Brady? Will she try passing off the kid as Xander’s like she did with Eric? Or will she actually admit she doesn’t know who the father is and get a paternity test? We will have to keep watching to find out.

The Bold And The Beautiful Spoilers: Ridge Needs To Clear His Head – Steffy In Charge At Forrester Creations When New B&B Episodes Air?