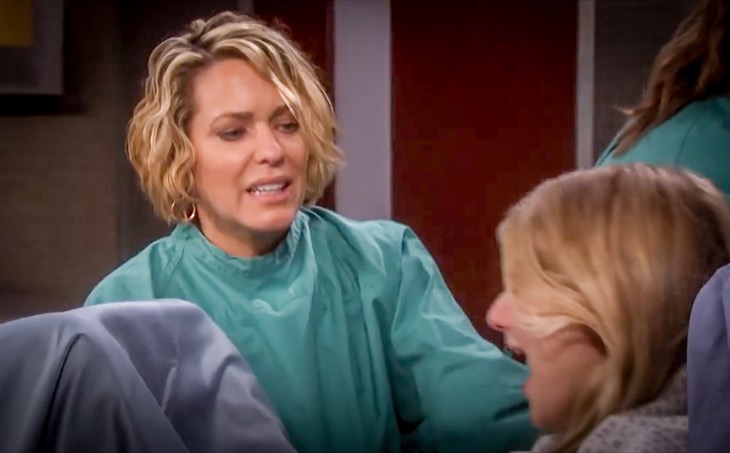 NBC Days of Our Lives spoilers and updates reveal that there is a lot in store this summer. We already know about the four weddings in July 2020. However, a new summer promo shows Sami Brady (Alison Sweeney) tackling one of the brides. Also, Philip Kiriakis (Kenneth Jay Johnson) returns, and Gabi Hernandez DiMera (Camila Banus) attacks a woman kissing her “husband.”

DOOL spoilers previously teased that Sweeney would reprise the role of Sami for a brief stint. We finally see a glimpse of her in the summer promo posted by the official Facebook page for the NBC soap opera. However, she isn’t happy. During Eric Brady’s (Greg Vaughan) wedding, Sami tackles the bride! Sami and Nicole Walker (Arianne Zucker) end up on the floor.

It looks and sounds like a typical Salem wedding!

YOU MIGHT ALSO LIKE: Days Of Our Lives Comings And Goings: Lucas, Sami, Eve, Vivian, And More Returning Summer 2020

Several months ago, Lauren Koslow (Kate Roberts DiMera) accidentally posted a picture of her on-screen son. She teased that Jay Kenneth Johnson was returning as Philip Kiriakis. Even though it was quickly deleted, it wasn’t fast enough.

Days of Our Lives spoilers teasers from head writer Ron Carlivati state that Gabi and Jake Lambert (Brandon Barash) will get closer. Then, she happens to walk into the garage and finds Gwen’s (Emily O’Brien) paws all over him. It seems Gabi is still convinced that Jake is Stefan DiMera because she refers to the mechanic as “my husband.”

Just last week, Carlivati teased to Soap Opera Digest that Allie Horton would show up on Eric’s doorstep. She has a secret and fans speculated it was an unexpected pregnancy. It turns out that this was a pretty accurate guess! For those that guessed Will Horton (Chandler Massey) and Sonny Kiriakis (Freddie Smith) would adopt the child, that was also dead correct!

The summer promo shows her giving birth, but there seems to be a problem. Will Allie and the baby be okay? We don’t have too much longer to wait as these scenes will begin airing next month. What do you think of the teasers and spoilers revealed in the promo clip? Which storyline are you looking forward to the most?