Days of Our Lives Spoilers: Will Surprises Sonny – What’s In Store For Their Future?

Days of Our Lives spoilers tease that Sonny Kiriakis (Freddie Smith) is in for a big surprise in an upcoming episode of Days of Our Lives when Will Horton (Chandler Massey) walks in the door of the Kiriakis mansion!

The Days of Our Lives weekly preview gives fans a peek at Will’s surprise for Sonny, as he walks in and says “Sonny”, and Sonny turns around and looks happy and relieved! The two will have a joyous reunion as now Sonny knows that Will was mistaken when he thought he was the one who had caused the death of Sonny’s mother, Adrienne Kiriakis (Judi Evans) and that was the thing they couldn’t get past! Of course, Will won’t be happy that Maggie Kiriakis (Suzanne Rogers) is turning herself into the police, after remembering everything from the night of the wreck – after apologizing to Justin Kiriakis (Wally Kurth) and explaining things to him. Will had promised Victor Kiriakis (John Aniston) he wouldn’t expose Maggie, but now she has exposed her self – and is there apologizing to Justin. Perhaps Victor kept up his end of the bargain anyway and got Will released! 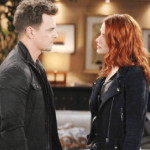 Sonny Kiriakis Has One Complication To Get Taken Care Of

Sonny does have one complication to get taken care of, before he and Will truly reunite – he has to let Evan Frears (Brock Kelly) know that Will is out and that he and Sonny are getting back together. Will won’t hold Sonny’s dalliance with Evan against him, after all, it was Will who had wanted the divorce and told Sonny to move on and forget him. Sonny hasn’t forgotten him and still loves Will, and he will admit it but he has been seeing Evan so he needs to do what is right by Evan and break up with him officially.

But before he does that, there is someone that wants to see Daddy Will – Arianna Horton (Sydney Brower)! Arianna will be very glad that her father is out of prison and she’s never stopped believing he would come home someday, and now her dream has come true! She rushes to Will and hugs him tight and Will gets tears in his eyes! He also gives Gabi Hernandez DiMera (Camila Banus) a call to let her know Will’s home so she doesn’t have to worry so much about Arianna. It is a happy day at the Kiriakis mansion other than the bittersweet knowledge that Maggie will soon be facing her charges for the motor vehicle homicide of Adrienne, which she may never forgive herself for, but at least she can be content in knowing that she has now done the right thing, even if she can never truly make amends to Will, Justin, and Sonny!