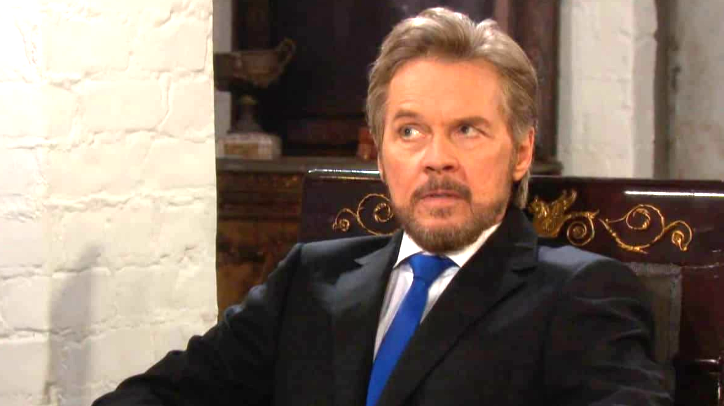 Days of Our Lives spoilers tease that Stefano DiMera, (Stephen Nichols) prior to Dr. Kayla Brady (Mary Beth Evans) and Dr. Sarah Horton (Linsey Godfrey) operating on him to remove the mind-altering microchip that makes Stefano out of Steve Johnson (Stephen Nichols) tells her that even if the chip is removed that the Phoenix will rise again and live, in an upcoming episode of Days of Our Lives!

Days of Our Lives viewers will recall that what Dr. Wilhelm Rolf (William Utay) referred to as “the essence” of Stefano DiMera is in that microchip, and its implantation into Steve Johnson’s brain is what made Steve into Stefano, at least mentally and personality-wise. But if Kayla and Sarah remove the chip and destroy it or possibly save it for research as to how it works, how will Stefano rise again as he swears he will? Might Rolf have saved a copy?

Does Stefano have a “twin” saved for such an occasion as this somewhere? Anything on a microchip can be downloaded and a copy can be stored somewhere, whether it be on a flash drive or a DVD, or in a computer in a secret location.

Whether his essence is his soul (some would ask, WHAT SOUL?!) or a blueprint of what was in Stefano’s brain that was converted to digital format – in other words, artificial intelligence – or cells from his brain taken from certain areas having been cloned, and in storage somewhere – Rolf would not just let the Phoenix die – he and Stefano would have to have had a pre-agreed upon backup plan! After all, the Phoenix always rises, even from the ashes! But how would he rise this time?

DOOL Spoilers – Could The Plan Be To Create A Totally Bionic Stefano DiMera?

This time around, the Phoenix “rose” by means of a microchip containing his “essence” or possibly a digital version of his brain, personality, and memories – or most of them – being implanted into a living body, that of Steve Johnson. Days of Our Lives viewers will recall that DiMera Enterprises owns a company called “Visionary Bionics”.

This is the company that had made Steve’s bionic “spy eye” which was used for corporate espionage by Stefan O. DiMera (most recently Brandon Barash) and also the pacemaker with matching control app downloadable to a cell phone used by Gabi Hernandez DiMera (Camila Banus) to control Julie Williams’ (Susan Seaforth Hayes), heart! Is it possible that a whole new bionic body is waiting for Stefano and his digital essence to be implanted in?

Days of Our Lives Spoilers: Nicole Reveals The Devastating Truth About Mackenzie To Eric https://t.co/WOfRUh3FIa pic.twitter.com/M3j2zkEgy3

If the body were totally bionic, the Phoenix not only could rise again to live a natural life, but it is entirely possible that he could rise to live forever! Totally bionic bodies don’t have problems like diabetes, and heart disease, and obesity, and cancer, and not even old age – if a part wears out, just replace it with a new one! The Phoenix could rise in this type of body and never diet again!

In this case, with every part of the Phoenix replicated with a bionic part, he would be closer to being an android than a real human, however. But the technology does exist, so anything is possible!

The Bold and the Beautiful Spoilers: Quinn’s Latest Stunt Has Huge Cost – Will Eric Pull The Plug On Marriage?