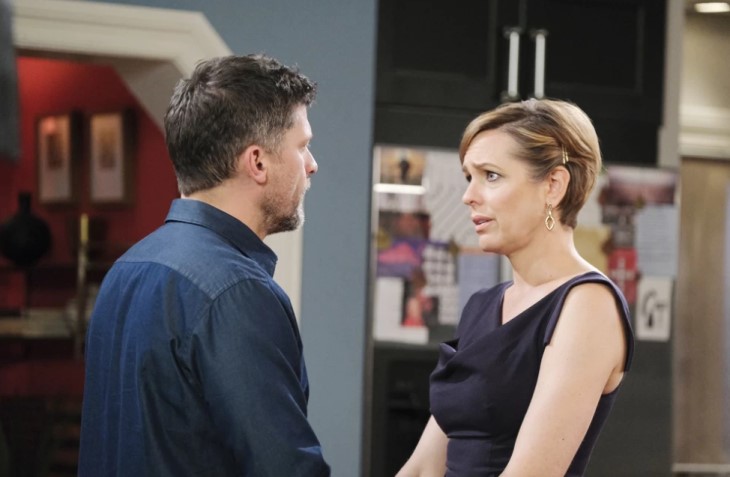 Days of Our Lives spoilers tease that Nicole Walker (Arianne Zucker) will reveal the terrible truth about Mackenzie Horton (Josephine and Rosalind May) to Eric Brady (Greg Vaughan) in an upcoming episode of Days of Our Lives!

As Days of Our Lives viewers will recall, Nicole went to New York and got the admission of Dr. Amanda Raynor (Victoria Platt) that Victor Kiriakis (John Aniston) and Xander Kiriakis (Paul Telfer) that they switched Mackenzie and Rachel when Mackenzie died, and that they had paid her to keep her mouth shut and to get out of town, and then Xander paid her again to get out of town when he was in Salem University Hospital hanging around to see how Mackenzie’s bone marrow transplant came out and discovered that she had still been working there in the obstetrics department.

Nicole became suspicious that there was something going on and that Xander and Dr. Raynor were keeping a secret when she overheard part of a conversation, and then had heard Brady Black (Eric Martsolf) talking about Rachel’s birthmark and realized Mackenzie had one just like it and in the same spot – she then arranged to get DNA from the baby and from Kristen DiMera (Stacy Haiduk) by setting up a fight with her in which she tore out some of Kristen’s hair!

However, Xander was one step ahead of her and paid the lab tech to falsify the results! But now, with Dr. Raynor’s admission, she knows she has to tell Eric, and then they will have to tell Brady and Kristen too – and Sarah Horton (Linsey Godfrey). Nicole dreads all the reactions when the truth is told – but especially dreads Eric’s reaction. No matter what, someone will be hurt but there is nothing she can do because she has to be honest with Eric especially.

Nicole finally comes clean with Eric, and as expected, he is devastated! She explains why she kept her suspicions a secret for so long, wanting to be sure before she said anything and that is what the “business trip” to New York had been about. The first thing he wants to do is break the news to Sarah, preferably before she walks down the aisle with Xander!

He also insists that Brady and Kristen must know the truth, even though he isn’t wild about the idea of Kristen as a mother and for that part of it, wishes that they didn’t have to tell the truth and just leave things as they are! However, considering the DNA test being falsified, Eric wonders if maybe they shouldn’t get another one done – just to be sure, but perhaps have it done somewhere else or ask Kayla Brady (Mary Beth Evans) to oversee having it performed to make sure it isn’t falsified again.

Kayla has a lot on her plate with “Steveano” Johnson (Stephen Nichols) being in the hospital recovering from Anna DiMera (Leann Hunley) poking his eye out with her shoe, and trying to get the chip out of his head, but she is the Chief of Staff and can make sure this DNA test isn’t falsified. However, by the end of the week everyone will know the truth!