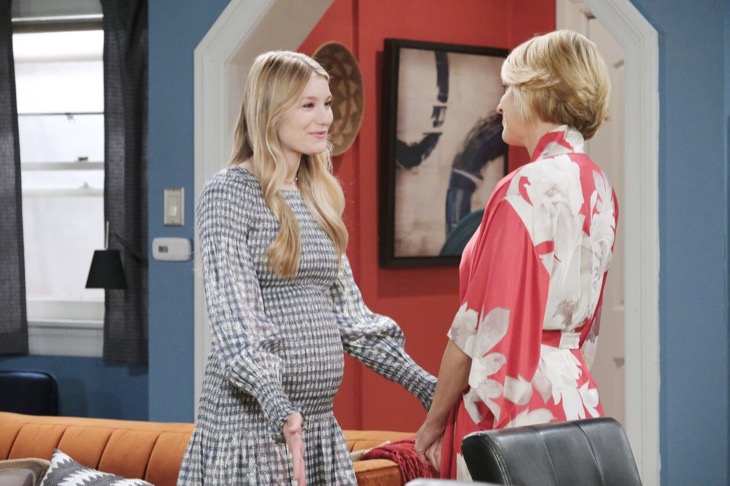 NBC Days of Our Lives spoilers reveal that Allie Horton’s (Lindsay Arnold) secret is about to cause chaos and conflict! DOOL fans can expect some surprises following Allie’s return on June 10. Allie’s been living in Europe with Lucas Horton (Bryan Dattilo), but this pregnancy apparently happened under his radar.

With the help of a hoodie and other lose-fitting clothing, it seems Allie was able to conceal her bun in the oven. Of course, it was easier to keep that secret from Sami Brady (Alison Sweeney). Allie was already having problems when Lucas was summoned. Things went further downhill after that and seemingly led to Allie being totally estranged from her mom.

It’s doubtful Allie’s pregnancy will do much to mend fences! As someone who got pregnant too young herself, Sami undoubtedly warned Allie about using birth control. Sami will probably play the blame game once she’s brought in the loop. She may point the finger at Lucas for letting this happen under his watch, which will probably frustrate Allie even more.

Days Of Our Lives Spoilers: Rafe Keeps Secret, But Sami Makes Will An Accessory

Fortunately, there’s hope for Sami and Allie’s relationship. Marlena Evans (Deidre Hall) would be the first to pipe up about Sami being a problem child over the years, but they managed to come together. Sami and Marlena have a solid bond now. That doesn’t mean there aren’t typical family issues and cases where Sami’s being Sami, but they’re on good terms in general.

Sami’s just getting a taste of her own medicine with problematic Allie. What Sami and Allie will need in the months ahead is someone to play peacemaker. There’s a good chance Nicole Walker (Arianne Zucker) will be the one who intervenes and tries to help these two patch things up.

Days of Our Lives spoilers say Nicole will be a huge part of Allie’s storyline along with Eric Brady (Greg Vaughan). In fact, their apartment will be where Allie first shows up and pushes for silence about her baby. Nicole will engage in a major war with Sami this summer, including a cake fight at the “Ericole” wedding reception.

Nevertheless, Nicole loves her own daughter with all her heart and wouldn’t want Sami to miss out on having a relationship with hers. Once Allie’s baby is born, that’ll serve as another way for Sami and Allie to connect. It looks like Allie may let Will Horton (Chandler Massey) and Sonny Kiriakis (Freddie Smith) adopt her son or daughter, which would keep the kid in Sami’s family.

Between Nicole and this new addition to the fam, Sami and Allie may agree to put the past behind them. Perhaps Nicole will even earn some words of gratitude from Sami following this whole ordeal. After all, if Marlena and Kristen DiMera (Stacy Haiduk) can learn to get along, there’s hope for any enemies on Days!