Days Of Our Lives Spoilers: Kate Gets The Serum For Vivian – Jake Gets Injected, Waits For Memories To Return 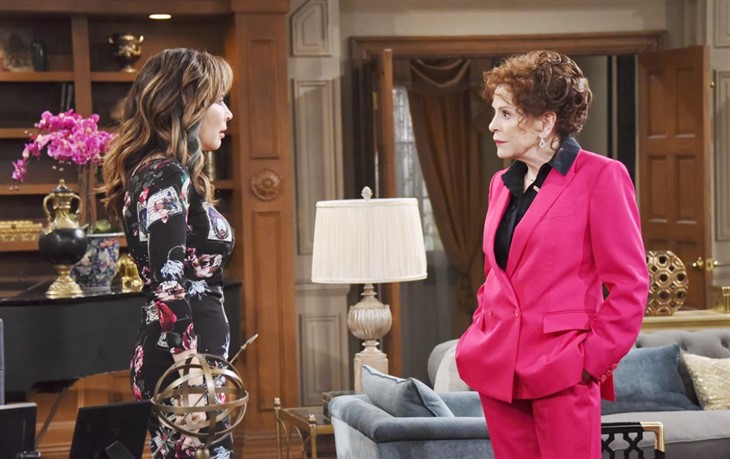 NBC Days of Our Lives spoilers tease that Jake Lambert aka Stefan DiMera (Brandon Barash) will soon have a big decision to make. As DOOL viewers know, Jake and Gabi DiMera (Camila Banus) recently discovered that Jake’s and Stefan’s DNA matched, and now it seems that Jake’s going to want some answers. And so are Gabi and Vivian Alamain (Louise Sorel). After all, they were led to believe that Stefan was brain dead and that his heart had been donated to Julie Williams (Susan Seaforth Hayes).

Well, it seems that Vivian will soon make an appeal to an unlikely source for help. As viewers know, Vivian is currently under lock and key by the Salem PD for threatening Lani Price Grant (Sal Stowers) at gunpoint at her wedding to Eli Grant (Lamon Archey). Under ideal circumstances, Vivian would go to her old buddy Wilhelm Rolf (William Utay) for some answers and for the serum that brings back memories.

But since Vivian can’t go talk with Rolf, and since Rolf positively refuses to help Gabi, they need someone else to go secure the serum from Rolf on their behalf…and unbelievably, it looks like that person is going to be none other than Kate Roberts (Lauren Koslow). It wasn’t long ago that Vivian (then played by Robin Strasser) shot Kate and buried her alive in the cemetery, so it’s remarkable that Kate’s going to agree to help Vivian with anything.

But according to DOOL spoilers, Kate will go to Rolf, and this will apparently come after Kate marches into the police station and holds Vivian at gunpoint! How they’re going to get from there to Kate going to see Rolf on Vivian’s behalf remains to be seen, but it’s likely that Gabi will have something to do with talking Kate into helping them. Perhaps Kate will decide to go see Rolf primarily for Gabi’s sake.

At any rate, DOOL spoilers say that Kate will get the serum from Rolf, and then it will be a matter of convincing Jake to actually take the serum. You can’t help but blame Jake for being skittish about getting injected with some strange serum, especially after Gabi tried to inject him with a dangerous hallucinogen before.

5 Reasons Why 'Days Of Our Lives' Ben & Ciara Are The Hottest Salem Couple Of All Time #DOOL #Days #DaysOfOurLives #CINhttps://t.co/PFrUozZcA4

But it seems that Jake will end up getting injected with the serum, and then it will just be a matter of time before Jake starts to remember something. Of course, Rolf’s serums don’t always work in predictable ways – sometimes they take a while to kick in. DOOL viewers will remember that for Will Horton (Chandler Massey), it took quite a while for the serum to take effect, and then his memories came flooding back all at once.

But given that DOOL spoilers also say that Gabi and Vivian will reel at some newfound truth about Jake, he could get his memories back sooner rather than later…and the results could be astounding. Perhaps this means that Jake will indeed be Stefan, and he’ll remember what happened to him before he turned up in Philly as Jake. Or maybe he’ll remember being someone other than Stefan – it’s really anyone’s guess at this point.

It will be interesting to see what happens here, and what exactly ends up convincing Kate to help out her old nemesis Vivian. Could the two women finally call a truce to their ongoing feud? Stay tuned to the NBC soap and be sure to keep checking back with SOS so you don’t miss any of the hot new DOOL news and spoilers. And don’t forget to check out our daily DOOL recaps as well!