Days Of Our Lives Spoilers: Hope Kisses Rafe And Is Rejected, But Still Gets Happily Ever After? 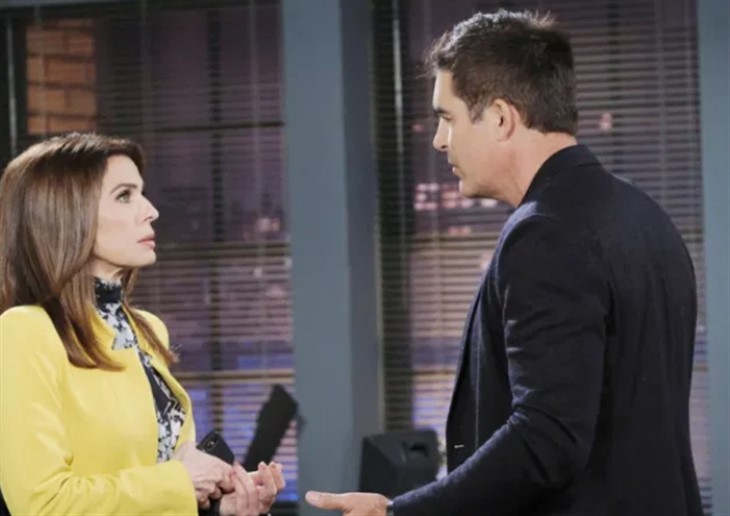 NBC Days of Our Lives spoilers for the week of August 24 reveal that Hope Brady (Kristian Alfonso) makes a bold move. We’ve seen her share some close moments with her former flame, Rafe Hernandez (Galen Gering). Hope will kiss the police commissioner, but why bother setting her up for another doomed romance? There might be a happily ever after in this story, but it probably won’t happen on-screen.

DOOL spoilers reveal that during the week of August 17, Rafe will take steps to save Hope. We have to assume that this has something to do with Vincent (Michael Teh) and Eve Donovan (Kassie DePaiva). In New York, Hope expertly took down the villain, but Vincent managed to escape. Now that Vincent and Eve are in Salem, Hope could run into them and it might put her life in danger. But never fear, Rafe, saves the day!

As fans know, “Rope” used to be involved and even got married. But the relationship would come crashing down on their wedding day. That is when Rafe’s secret about sleeping with Sami Brady (Alison Sweeney) was publicly exposed by Claire Brady (then played by Olivia Rose Keegan). Rafe tried to smooth things over, but Hope was unable to get past his betrayal and they got a divorce.

However, we have seen Rafe and Hope share some close moments. It began when Rafe lost custody of David Ridgeway (Caleb and Kyler Ends). He was devastated and Hope tried to be there for him. There have been a few other “moments” as well, which had fans speculating if “Rope” would get back together.

Days of Our Lives spoilers from the latest issue of Soap Opera Digest reveal that during the week of August 24, “Rope” kiss. Hope ends up being the one to make the first move and we don’t think she’s just thanking him for saving her life. She has feelings for Rafe, even after all of this time. Unfortunately, heartbreak is inevitable since Rafe is leaving Salem soon.

Days  Of Our Lives Spoilers – Devastating Rejection Ahead

There was a theory that Rafe and Hope might leave town together, but that’s not happening. For one thing, Rafe and Hope will make their last appearances at different times. Second, Hope had a story to play out but quit the soap before filming those scenes. Plus, a summer preview clip released a few months ago showed Hope crying and talking about how she “really did love him.” We have to assume that she’s crying after being rejected by Rafe.

With Hope not having an official exit story due to her abrupt exit, the character’s disappearance will need to be explained. Perhaps after Rafe leaves town, Hope will decide to go after the man she loves?

Days Of Our Lives Spoilers And Recap Thursday, August 13: Gabi And Jake Are Onto Gwen – Claire Bumps Into Eve #Days #DOOL #DaysOfOurLiveshttps://t.co/Y376xl8xLI

It would be nice if Hope would get a happily ever after… even if it happens off-screen. It is the least writers can do for Alfonso’s dedication to the soap for nearly 40 years. We also want to see Hope finally be happy. She hasn’t had any luck in the love department since Bo Brady’s (Peter Reckell) death.

Prince Harry And Meghan Markle Met On A Blind Date, But Who Set Them Up?