Days of our Lives Spoilers: Evan Conspires With Orpheus To Keep David 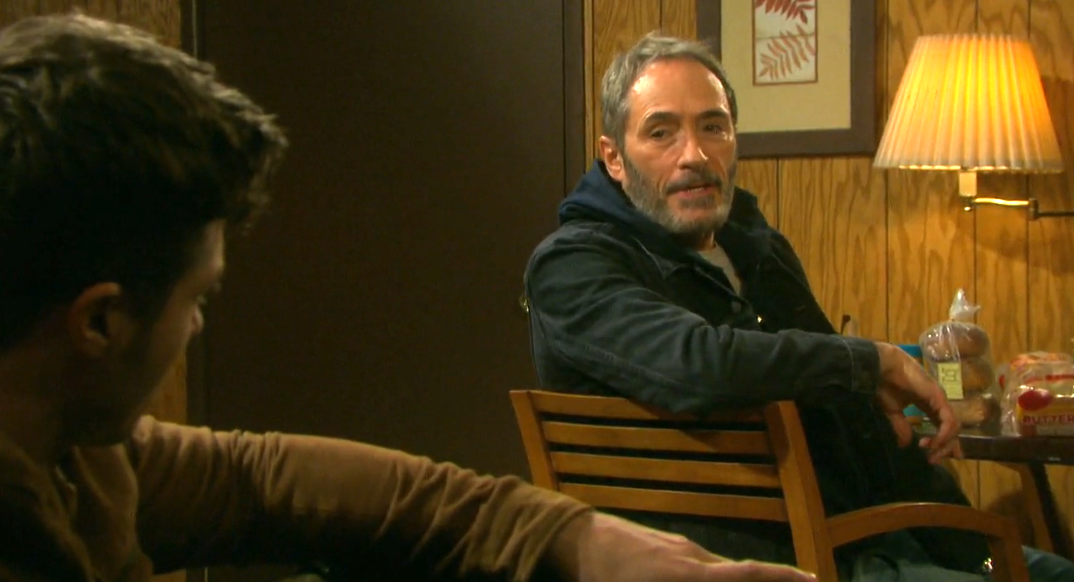 Days of Our Lives spoilers tease that Evan Frears aka Christian Maddox (Brock Kelly) will conspire with his father, Milo Harp aka Orpheus (George Del Hoyo), to keep his son David Ridgeway (Kyler and Caleb Ends) in an upcoming episode of GH!

Days of Our Lives Spoilers – Evan Frears Meets Up With His Own Birth Father, Who Is Taking Care Of David Ridgeway

Days of Our Lives viewers will recall from previous episodes that a hooded man ran past Lani Price (Sal Stowers) and Eli Grant (Lamon Archey) as they sat on a bench in Horton Town Square, bumped into Lani and dropped a small toy train. When Lani and Rafe had gone to the Salem Police Department to offer Police Commissioner Rafe Hernandez (Galen Gering) their assistance in finding the kidnapped David, Lani pulled out the little toy train from her purse, which Rafe recognized as David’s.

This hooded man will be revealed to be Milo Harp, otherwise known as Orpheus. Longtime Days of Our Lives viewers will recall that Milo Harp was once an ISA agent who partnered with Roman Brady (Josh Taylor) years and years ago when Roman and Marlena Evans (Deidre Hall) were still married and before Roman disappeared. The two of them were on an ISA mission in 1979 when things went terribly wrong, and Milo’s wife, Rebecca (mentioned character) came to where he and Roman were to warn them of a KGB ambush.

Gunfire was all around, and Roman had heard footsteps. He did the right thing, calling for the person to identify themselves and when he didn’t get a response, he fired in the direction of the footsteps – thinking it was a KGB agent, but it was Rebecca – his partner’s wife! Roman was horrified! Milo and Rebecca had two little children, a boy, and a girl.

Milo started going by the alias “Orpheus” and plotted revenge against Roman for many years, and in 1986, he kidnapped Marlena and shot her in the back with a tranquilizer, and blew up Roman’s house with her in it to make him think that she was dead, when he actually had kidnapped her and taken her to a secret hideaway in Europe.

He made Marlena play mother to his children in exchange for not harming Roman, Carrie Brady (Christie Clark) or their twins, Eric Brady (Greg Vaughan) and Sami Brady (Alison Sweeney). Now it has been revealed that Evan is Orpheus’ son, all grown up and with a son of his own that he needs help to keep!

The father and son relationship between Evan/Christian and Orpheus is not a warm or functional one, but Evan/Christian has no one else to turn to for help, not only in taking care of David when he is out but also helping him come up with a plan to keep him and to bring Rafe’s plans to a standstill!

There is a lot of tension, and Evan/Christian sought out his father as a last resort; they have been estranged since Evan/Christian was a teenager! But he knows that if he has to plot and plan something, his dad is the go-to-guy; he is a genius at those kinds of things, and he always calls him when he’s made mistakes that he can’t get himself out of as well!

Orpheus gives his son a brief history of how he had escaped death during his last time in Salem, and he and his son begin brainstorming about how to keep Evan/Christian out of prison and how to make sure that he can keep David for himself. Evan/Christian is literally backed into a corner so he is grateful for his previously estranged father’s help!