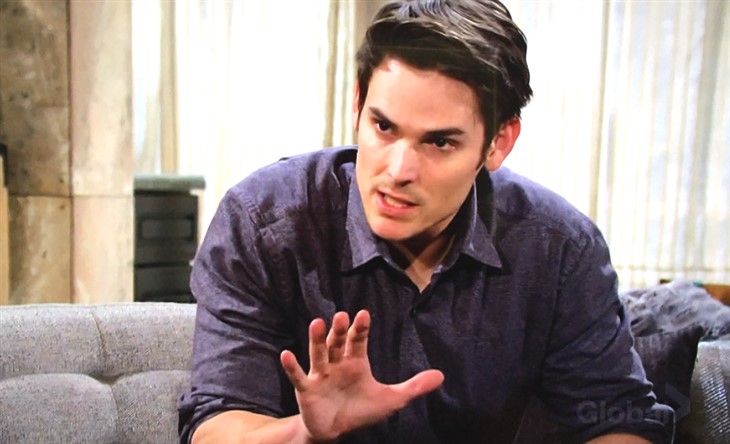 CBS The Young and the Restless spoilers tease that when the show returns the fallout from Adam Newman’s (Mark Grossman) past will be epic and ripple out to rock not just the Newman family but it will also inflame the Abbotts as well.

Y&R exec Josh Griffith spoke to Soap Opera Digest and spilled a bit about what is coming down the pike now that the show is returning to the air with brand new episodes.

He revealed the stunning bombshell that somehow Adam’s past actions will negatively impact the people in his present-day life. How so?

What in the world happens that Adam’s past crime haunts the Abbott clan along the way?

Here are three scenarios in which Adam’s past killing might undermine his present-day life and ruin any chance he has at happiness.

Griffith hinted that Adam’s demons arise based on his past killing when he was a kid. The first potential fallout scenario is a no-brainer because if Adam is ticked off one of the first people he will attack is Billy Abbott (Jason Thompson). Rumor has it that these two alpha males will engage in WWIII and it could be all about business or it could involve someone close to both of them, Victoria Newman (Amelia Heinle).

Adam and Victoria have been enemies and siblings since the beginning. He is jealous of her for having grown up with their father and is considered his successor. If Adam starts to get vengeful based on how messed up he is over the killing, he could lash out at Victoria.

Nothing is more important to her than her kids, will they be in the line of fire?

#3 Chelsea Newman Is Not A Very Patient Woman

Chadam is doing ok right now but if he keeps going down a dark path, Chelsea Lawson (Melissa Claire Egan) might cut her losses and run. She has her son to think about and Adam might get dangerous all over again when his demons rear up.

3 Reasons Why 'The Young and The Restless' Adam And Sharon Should Be Together #yr #youngandrestless #Shadamhttps://t.co/7fl9eLvNtq

How will Adam’s world crumble all around him? These are three possible scenarios that could develop based on what we know about what comes next for the bad boy. Of course, anything else entirely different could also happen to mess up his life so be sure to tune and catch the brand-new Y&R!