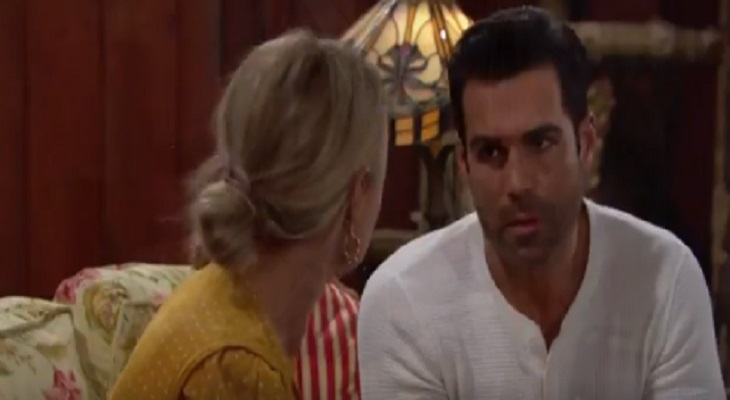 Rey (Jordi Vilasuso) was shocked by what he heard on ‘The Young and the Restless’. But a rash decision was made as soon as Mia (Noemi Gonzalez) said Arturo’s (Jason Canela) name. Rey told Ria that she could have her first love and he quickly left the apartment that recently appeared above Crimson Lights.

St. Valentine’s Day, or week as some say, is a time when loving, honest couples enjoy time together. But a balanced relationship isn’t one that ‘Ria’ has. Instead, Mia’s inner thoughts were revealed, exposing her deepest secret.

As the Mia-Arturo connection took place during a time before both alter egos existed, Y&R fans don’t know if their friends referred to that high school duo as ‘Marturo’, or possibly ‘Aia’, which is less catchy, yet does offer a stronger emotional play.

For his part, Arturo does actually love Abby (Melissa Ordway). He’s been trying to build a life with her. However, Mia’s follow of Rey and him to Genoa City, Wisconsin, has unnecessarily complicated Arturo’s life.

Engagement, followed by a photo spread that showed Abby and Rey on the cover of a magazine, with an included lead story. Rey just happened to buy Mia a handful of those old school glossy paper items, which were props written into the scene to help trigger what could be the end of this couple.

Rey was understandably stunned when he heard Mia call out Arturo’s name. Why, after all this time and everything they apparently settled would she do that?

Next week on #YR, Kyle spends time with Summer, things get heated between Mia and Abby at a party, and Rey confronts Sharon. pic.twitter.com/0pRT4DQFsN

As viewers have recently seen, Mia’s feelings remain fully conflicted. The passive-aggressive anger she feels where Abby is concerned plays out into a physical hair-pull at the GC Athletic Club. That event will further sink Mia’s hopes of preserving ‘Ria’, although it will be fair to ask if that arrangement is what she really wants?

Mia’s secret and Rey’s reaction will now impact Arturo and Abby’s lives. While some may opt to focus solely on Mia as the cause of this trouble, it’s clear that Rey and Arturo share elements of blame. Valentine’s week shouldn’t be like this!

Days of Our Lives Spoilers: Rafe Threatens Ted – Stay Away From Hope!