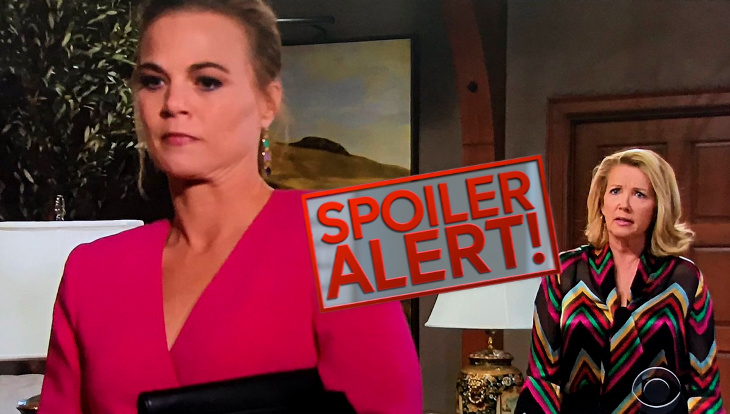 “Young and the Restless” spoilers for Wednesday, January 23, tease that Mia Rosales (Noemi Gonzalez) will flirt with someone surprising. At the coffeehouse, Billy Abbott (Jason Thompson) turns on the charm and Mia charms right back. However, the exchange is all in good fun!

Sharon spots Mia soon after and promises she’ll attend the vow renewal. It’s clear that she wants to make a statement here. Over with Rey Rosales (Jordi Vilasuso), he drops the best man bomb on Arturo Rosales (Jason Canela). Arturo’s taken aback, but he gets on board with the idea. He later learns Mia was behind it, so he confronts her later. Mia insists they should both just try to move on.

Back with Sharon, she chats with Rey privately. He’s sorry Mia just sprang the vow renewal news on her like that. Sharon assures Rey that it’s fine and lets him know she’ll be at the ceremony. She doesn’t see any reason why she shouldn’t show up.

At Victoria Newman’s (Amelia Heinle) place, she speaks with Cane Ashby (Daniel Goddard) about Lily Ashby (Christel Khalil). Victoria’s upset about Billy spilling their kissing secret, but she adds that they’re the ones who gave him a secret to spill. They admit to going through a hard time and not coping correctly.

Billy arrives soon after and bickers with Cane. After Cane heads out, Victoria confronts Billy about adding to Lily’s suffering. She’s also still angry about being Billy’s backup plan. Victoria doesn’t think a reunion can work, but Billy disagrees. They argue until Billy makes a comment about Victoria not being able to care for anyone.

Over with Ana Hamilton (Loren Lott), she fibs to Devon Hamilton (Bryton James) about the name of the songwriter. Later, Mia is relentless in her quest to lock down the club as her vow renewal venue. Devon suggests that Mia reminds him of Hilary Hamilton (Mishael Morgan) in that way, so he agrees to make this ceremony happen for her.

Devon eventually revisits the songwriter issue and calls Ana out for lying. He insists he could pull Fenmore “Fen” Baldwin’s (Zach Tinker) from the streaming service, so Ana’s forced to make a confession. She admits that she’s the person who wrote Fen’s latest tune.

Meanwhile, Nick Newman (Joshua Morrow) can’t figure out who would hate Victor Newman (Eric Braeden) enough to dig the murder weapon out of the lake and frame him. Nikki Newman (Melody Thomas Scott) listens to Nick and finally has a pretty good idea about how that fireplace poker ended up on dry land. She marches over to Jabot and accuses Phyllis Summers (Gina Tognoni) of never throwing it away.

Phyllis confesses that she did indeed keep the fireplace poker. She contends that she refuses to go down for this, so “The Young and the Restless” spoilers say things are spiraling out of control! We’ll give you updates as other Y&R details and rumors emerge. Stay tuned to see what’s next in Genoa City.