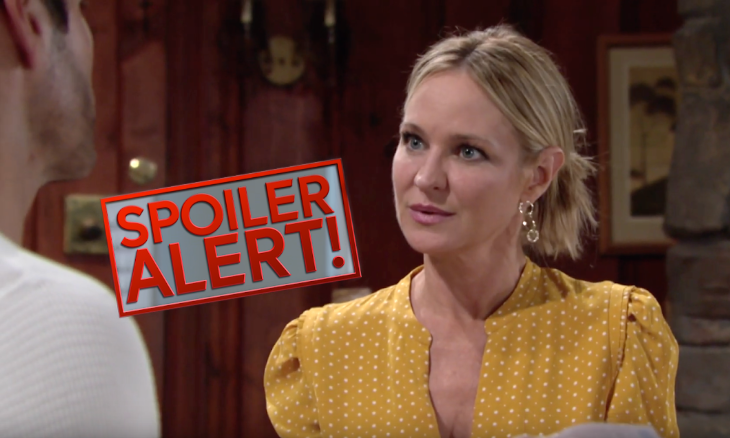 “Young and the Restless” spoilers for Thursday, February 14, 2019, tease that Rey Rosales (Jordi Vilasuso) will grill Sharon Newman (Sharon Case) about the 911 call. At the cottage, Sharon tries to play it off as a pocket dial. Rey thinks there’s more to the story and wonders if somebody borrowed Sharon’s phone. He keeps revving up the pressure, so Sharon wonders if Rey’s love profession was real or an attempt to manipulate her.

Rey notes that his love for Sharon is real just like this murder case. He wants to get to the bottom of what happened, so Sharon finally agrees to tell the story again. She states that Victoria Newman (Amelia Heinle) shared the news of J.T. Hellstrom’s (Thad Luckinbill) abuse before heading upstairs. Rey determines that Sharon must’ve seen J.T. at the house that night.

Soon after, Rey suggests Nikki Newman (Melody Thomas Scott) had to have assistance with the burial. He guesses Nick Newman (Joshua Morrow) must’ve pitched in. Rey’s grilling session eventually gets too intense for Sharon, so she blurts out that it was self-defense and they had no choice. You can bet Rey will demand more info now that he knows for sure others were involved.

Sharon spilling the truth.
Rey broke her down and I love it.
This secret has been causing Sharon way too much stress, honestly.#Shey #YR pic.twitter.com/vcdSGKQjy9

At Nick’s house, he enjoys some Valentine’s Day strip trivia with Phyllis Summers (Gina Tognoni). After the game takes them down memory lane, Nick gives Phyllis a present to remind her of their first wedding in New Mexico. They once married at a bar called Pepe’s Roadhouse, so Nick leaves Phyllis touched by handing over the sign.

Meanwhile, Arturo (Jason Canela) snaps at Mia Rosales (Noemi Gonzalez) over her latest blunder with Rey. Mia fires back about the engagement picture spread in Life & Style. Arturo wants Mia to fix things with Rey, but she’s not sure that’s possible.

Push comes to shove when a rivalry heats up in Genoa City this Valentine's Day. Check out all of the @CBSDaytime #Valentines specials here: https://t.co/t6fe4WSYJY pic.twitter.com/5pwqVf4XM2

Later, Mia ends up at the athletic club alone. Arturo strolls in with Abby and spots his ex, so he’s eager to get out of there. However, Abby wants to stay put. She stews as Arturo explains his earlier fight with Mia and ultimately decides to confront her.

Over with Mariah Copeland (Camryn Grimes) and Tessa Porter (Cait Fairbanks), they take a seat at the bar and drink Champagne. Mariah notices Tessa seems preoccupied and assumes it’s about Nikki’s confession. Tessa eventually admits she’s worried – and not just for herself.

Mariah assures Tessa that Nikki kept everyone else out of this. She points out that Newmans know how to keep secrets, but Tessa still seems on edge. Nearby, Kerry Johnson (Alice Hunter) dances with Jack Abbott (Peter Bergman). He offers her the diamond bracelet he bought and notes that he booked a suite for later. Jack notes that he has one other surprise he intends to give Kerry first.

At the Abbott cabin, Lola Rosales (Sasha Calle) rages over Kyle Abbott’s (Michael Mealor) kiss with Summer Newman (Hunter King). She insists Kyle has proven all he was interested in was sex. Lola is relieved she didn’t waste her first time on Kyle. He pushes Lola to hear him out and urges Summer to back him up on the idea that they’re just friends. Summer contends that Lola wouldn’t believe her.

Lola decides she’s done with all the drama and storms out. Once she’s gone, Kyle rips into Summer for making such a mess. Summer believes Kyle wants her deep down, but he denies it. He feels like Summer only causes pain and why would he want that?

“The Young and the Restless” spoilers say some great scenes are on the way. We’ll give you updates as other Y&R details and rumors emerge. Stay tuned to see what’s next in Genoa City.