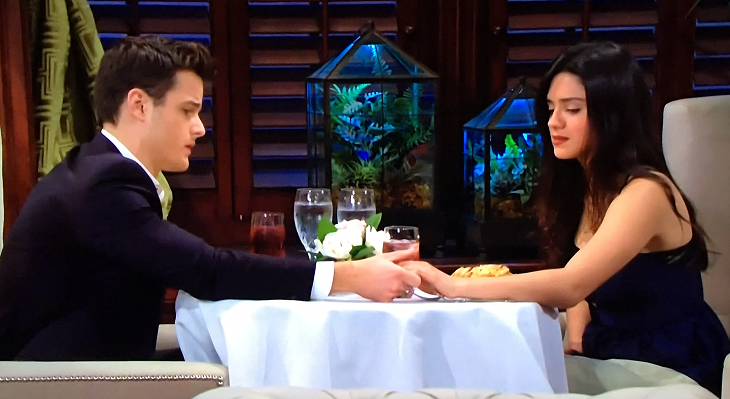 “The Young and the Restless” (YR) recap for Wednesday, April 10, 2019 reveals that over in Vegas, Billy Abbott (Jason Thompson) takes a call from Jack Abbott (Peter Bergman), who reveals Ashley Abbott (Eileen Davidson) just unveiled a ‘collective’ plan identical to theirs. Billy wonders if Jack thinks he’s the leak, and irritated, cuts off the call. He and Victoria Newman (Amelia Heinle) discuss being viewed as screw-ups – she feels her father will never completely trust her.

Y&R’s Victoria Newman gets a text from Brandon Rose (Mitch Eakins) about the poker game tonight, and tells Billy he claims to have seen her father meeting a man at the games. He doesn’t think it’s a good idea for her to go. Victoria agrees – she’ll have them move the game to her suite. Billy insists on staying.

Brandon arrives and wants to move the game due to Billy’s presence. He says this is the only room where Brandon can play with Billy’s money. As they prepare to play, Brandon asks Billy to answer the door – it’s Sinead (Lira Kellerman), who purrs that she and ‘Bill’ go way back. He informs Sinead he won’t be playing.

Young And The Restless Spoilers – Victoria Newman Is A Card Shark

Victoria decides she’s going down. During play, Victoria’s disappointed her father’s friend hasn’t shown. She learns his name is Spider. Sinead knows she’s Victoria Newman and wants to win her trust fund, but Victoria’s hand beats hers. After the game, Victoria’s disappointed Spider never showed. Brandon says goodbye to ‘Jeni’ and Billy and Victoria kiss. She giggles at him calling her a shark and warns about going slow.

At the ranch, Nick Newman (Joshua Morrow) and Nikki Newman (Melody Thomas Scott) play cards with Johnny and Katie. The kids go to the kitchen, and Nick complains to his mother about Victor Newman (Eric Braeden) taking a trip – what was so urgent he had to leave her? Talk turns to Phyllis Summers (Gina Tognoni) and Summer Newman (Hunter King) going away. Nick didn’t know. He vows he and Phyllis are through.

Nikki’s encouraged and suggests he try a dating app. Nick will focus on business. He takes a call about work, after which he and Nikki discuss Abby Newman’s (Melissa Ordway) disillusionment with Arturo Rosales (Jason Canela). She sniffs that she tried to warn her. Nick asks Nikki to come to Dark Horse, but Nikki only wants to spend time with Victor. Once alone, Nikki leaves Victor a voicemail.

At Crimson Lights, Y&R’s Kyle Abbott (Michael Mealor) tells Lola Rosales (Sasha Calle) that Summer is on a mother-daughter trip. Lola suggests they talk. They decide to have dinner at the GCAC later. Someone unseen snaps photos of them together.

At Rey Rosales’ (Jordi Vilasuso) place, Nate Hastings (Sean Dominic), arrives to examine Lola Rosales. He warns spending all day at the new restaurant on her feet could set her back. After checking her, Nate advises she can take the job if she’s careful. She thanks him, and he says she should be thanking Summer. Talk turns to Rey and the case of who attacked Lola – she wants to see the person go to jail for a very long time.

At the Abbott mansion, Y&R’s Jack Abbott fills Kyle in on Ashley’s campaign and the leak. Jack knows he wouldn’t do this to Jabot…he’s not so sure about his wife. Kyle insists Summer didn’t tell Phyllis and asks Jack not to say anything to her about his suspicions. Jack agrees but has to get to the bottom of this.

Young And The Restless Spoilers – Kola Documented By Someone Taking Photos

Kyle meets Lola at the Club, where she hopes they can talk from the heart. Again, someone snaps photos. The pair talk about his marriage. Lola knows it’s not real. She explains she wouldn’t have sex with him because she didn’t grow up believing in fairy-tale endings – she kept expecting something to ruin it. Everything’s clear to Kyle now. They agree their lives don’t make sense without one another. Lola would believe him this time if he said he loved her. Kyle never stopped loving her. Meanwhile, at the bar, Nick Newman chats up a strange woman named Sarah.

Across the room, Kyle and Lola go over everything that happened between them and agree things could be so different now if they’d made other choices. They don’t know what lies ahead, but Lola wants to find out what they could be together. “We should go get a room,” she says.

Back at Nick Newman’s place, he brags to Sarah about owning The Underground. She has an idea for a hip, new club – with topless male bartenders. Nick undoes his shirt and they kiss.

Back at the Abbott mansion, Jack has thought and roots through the basket Ashley sent. He finds a listening device. And that’s a wrap. Don’t forget to check often with Soap Opera Spy for all your soap needs!

‘Days of Our Lives’ Recap & Spoilers Wednesday, April 10: Will Has A Tumor – Jack Gets Knocked Out