Young and the Restless Recap Tuesday, January 15: Nick Tells Victor Nikki Needs Him, Begs Him To Let Michael Defend Him 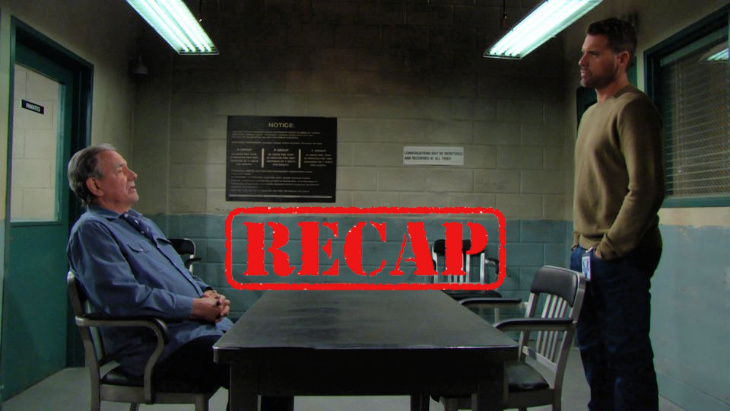 “Young and the Restless” (YR) recap for Tuesday, January 15, 2019 reveals that over at the penthouse, Devon Hamilton (Bryton James) tells Ana Hamilton (Loren Lott) that he put a rush on Fenmore Baldwin’s (Zach Tinder) single and released it. Ana is cool about it until she listens and realizes he released her mix. She thanks him enthusiastically. Devon confirms her version was better, though it hurts his ego. She has a gift and has a real future in the business. He wants to put the songwriter on contract as well. Ana sips her drink self-consciously.

At Jabot, Jack Abbott (Peter Bergman) pays Kerry Johnson (Alice Hunter) a visit and they canoodle in the elevator.

At the Athletic Club, Lauren Fenmore Baldwin (Tracey E. Bregman) is thrilled when Fenmore Baldwin plays his first single. Michael Baldwin (Christian LeBlanc) notes he walked away from law school from this, then adds, “My son the pop star…well done.” Lauren tells her son they’ll be singing the song everywhere. Fenmore jokes he’s going to cry, then shows them the interest it’s already generating online. Michael has to go, but advises Fenmore he was right to follow his dream. They embrace. Lauren orders champagne. On his way out, Michael crosses paths with Jack Abbott and Kerry Johnson, who upon learning no one is at the Abbott house suggests they go there.

At the police station, Nick Newman (Joshua Morrow) visits Victor Newman (Eric Braeden), and says he believes he’s innocent. Nick won’t give a reason for his epiphany and announces he’ll get Victor’s legal strategy going in the right direction as it’s been a disaster so far. Victor asks who he thinks he’s talking to, and warns arrogance doesn’t become him. It’s more complex than Nick realizes and thinks his strategy was a necessity. Michael Baldwin arrives. Nick says, “Meet your new lawyer.”

Victor doesn’t need him and asks Michael to leave. Michael argues with Victor, who insists he prefers to be in solitary. Nick calls him a liar then asks Michael to leave. Victor fumes at Nick for calling him a liar. Nick’s undeterred. He thinks someone is framing him and if he tries to thwart them, he’ll put the family at risk. Victor confirms it. Nick states Nikki Newman (Melody Thomas Scott) needs him. He knows Victor had nothing to do with J.T. Hellstrom’s (Thad Luckinbill) death and he asks him to let Michael take his case for Nikki’s sake. Victor assures Nick he’ll get out and lets him know he’s proud of him.

Victoria Newman (Amelia Heinle) has dropped Reed Hellstrom (Tristan Lake Leabu) at the airport before she arrives at the ranch. She says she came quickly since Nikki Newman sounded upset. Nikki shows her the fireplace poker. Victoria gasps, “That’s at the bottom of the lake.” Nikki replies, “Not anymore.” She also tells Victoria that Nick Newman was there last night and now he knows everything.

Victoria’s angry that she told Nick Newman of all people. Nikki was too upset to handle it herself. She adds he doesn’t know Sharon McAvoy (Sharon Case) and Phyllis Summers (Gina Tognoni) were involved. Victoria warns that Nick has changed since he started Dark Horse and he thinks he knows what’s best and could involve the police but they’ll be screwed! Nikki argues that Nick’s not the problem and they need to figure out how the poker got there, who did it, and why.

Nikki points out even if it’s a duplicate; someone else knows. Victoria decides this is way out of hand. Nikki feels sticking together is their best bet at getting out of this nightmare. “We’ll find out who’s tormenting us and why, and then we’ll stop them.”

At an unknown location, a video feed shows Nikki Newman and Victoria Newman sitting together at the ranch.

At the Abbott mansion, Kerry Johnson and Jack Abbott make out, then she reveals she has a surprise for him. Kerry makes him close his eyes and waves a scent under his nose. He likes it. It’s a fragrance especially for him and calls it Jack of Hearts. He puts some on and they resume making out. After, Jack comes downstairs after freshening up and catches Kerry about to leave without saying goodbye.

Kerry claims it’s a work day and she worried her presence may have agitated Dina Mergeron (Marla Adams), but Jack argues no one’s expected for hours. Kerry purrs she’ll make it up to him upstairs and sends him up first. Jack looks confused at her behavior. Once alone, Kerry takes the vial of Jack of Hearts out of her purse, looks at it, and looks up the staircase.

Fenmore Baldwin joins Ana Hamilton and Devon Hamilton at the penthouse and they toast to success. Devon muses it would be a perfect celebration if Ana’s writing friend was there. Devon leaves for a meeting, and Fenmore confronts Ana about not revealing she’s the songwriter and he reminds her Devon loves her and wouldn’t steal her songs. Ana admits she’s not afraid of that but won’t say why she’s insisting on staying anonymous. Fenmore presses her, and she angrily warns him to drop it or he’ll ruin a good thing.

Michael Baldwin rejoins Lauren Fenmore Baldwin at the Club and they discuss Fenmore Baldwin’s single. Michael’s proud but one song on the radio guarantees nothing. Lauren agrees the music business is challenging but urges him to let Fenmore enjoy this. Michael’s surprised to hear Fenmore won’t be recording his own songs, but Lauren explains Devon Hamilton’s negotiating with a hot songwriter.