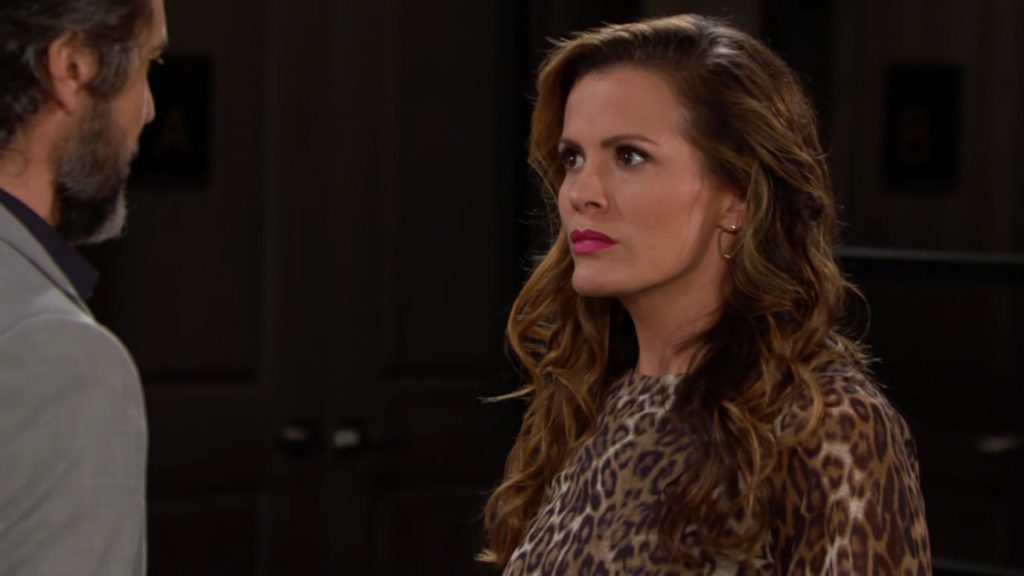 The Young and the Restless (Y&R) spoilers for the week of Monday, November 4 through Friday, November 8, 2019 reveal Chelsea Lawson Newman (Melissa Claire Egan) may be in a heap of trouble as Simon (Jeffrey Vincent Parise) meets with her, demanding for her to return the money her late husband had that was his. Chelsea turns to Kevin Fisher (Greg Rikaart) for a dangerous plan, but it appears that Simon is already one step ahead of her. How will Chelsea keep this brewing trouble away from Nick Newman (Joshua Morrow) and his new plans of pursuing a career in politics?

Y&R Spoilers: Chelsea Lawson Newman May Be In A Heap Of Trouble

Y&R sources tease that the DNA results are in and Theo Vanderway (Tyler Johnson) is indeed Dina Mergeron’s (Marla Adams) grandson. He will meet with his paternal grandmother for the first time, but she is shaken when she hears his last name. Kyle Abbott (Michael Mealor) continues to warn anyone who will listen about how deceptive Theo can be, but his cries fall on deaf ears and causes great devastation for Kyle as no one is listening to him, including his new bride, Lola Rosales Abbott (Sasha Calle). Jack Abbott (Peter Bergman) is forced to play peacemaker this coming week.

When it comes to love, it seems that Mariah Copeland (Camryn Grimes) and Tessa Porter (Cait Fairbanks) are the only couple on solid ground. Mariah has a huge surprise for Tessa this week, but how will Tessa react to what Mariah has planned?

Young And The Restless Spoilers: Chloe Mitchell And Kevin Fisher Work Together

The Young and the Restless spoilers show that Chloe Mitchell (Elizabeth Hendrickson) and Kevin Fisher work together, undercover to find out what is going on; both concerned for Chelsea as it appears that Simon is one step ahead of the former con-artist!

The Young And The Restless #YR Spoilers: Adam Newman Gets A Surprise! @celebratesoaps https://t.co/i926DizziE

Nikki Newman (Melody Thoams Scott) and Billy Abbott (Jason Thompson) appear to work together; both taking a massive risk, but will it pay off? Meanwhile, Amanda Sinclair (Mishael Morgan) does everything in her power to elude anything that has to do with her past. Who is she working for and what is the attorney hiding? Adam Newman (Mark Grossman) appears to be up to his same old tricks when he begins to lie again. Who will be on the receiving end of his hidden agenda this time?

Y&R fans will be excited to see that Jon Briddell has joined the cast of the CBS soap opera as Eric Vanderway. Be sure to be on the look out for the appearance of the newly found Abbott heir!

Be sure to tune into CBS’ The Young and the Restless (Y&R) on Monday, November 4, 2019 to catch up on everything happening right now in Genoa City. Check Hollywood Hiccups often for updates, news, rumors and spoilers!

Days of Our Lives Spoilers: Kristen Blurts Out Shocking Revelation to Eric – Learns Sarah is Pregnant