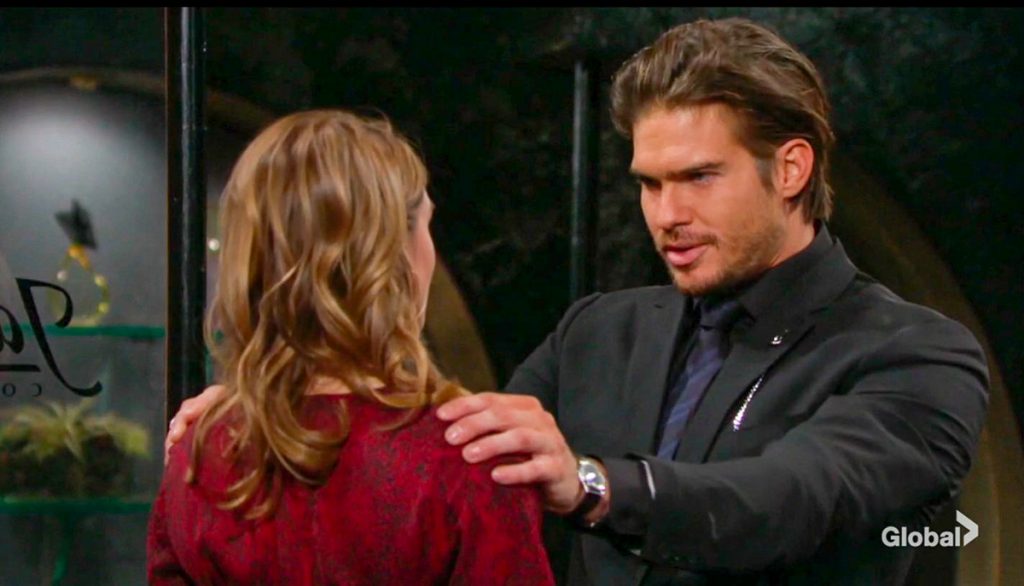 The Young and the Restless (Y&R) spoilers for Wednesday, November 27, tease that Adam Newman (Mark Grossman) will worry about his son. At Adam’s place, he does his best to comfort Connor Newman (Judah Mackey) over a nightmare. Adam encourages Connor to talk about it and eventually suggests they could call Sharon Newman (Sharon Newman), but Connor wants to see his mom.

The Young and the Restless Spoilers – Connor Is having panic attacks

Connor keeps complaining about intense stomach pains, so Adam decides he’ll get in touch with Chelsea Lawson (Melissa Claire Egan). At Nick Newman’s (Joshua Morrow) house, he’s puzzled over a delivery that’s just arrived. Chelsea’s worried about Nick opening, so he assumes she’s behind it. Once Nick pulls out what’s inside, he sees that it’s a councilman nameplate. Chelsea once again apologizes, but Nick makes it clear that he’ll stay busy with New Hope.

Although Chelsea needs to leave for the Grand Phoenix soon, she squeezes in a few moments with Nick before she goes. Nick and Chelsea lean in for a kiss, but Adam’s call interrupts. Chelsea gets updates on Connor’s issues and opts to stay over at Adam’s again, especially since Nick’s going out of town for the night.

At Adam’s penthouse, Chelsea learns Connor’s stomach pains subsided after he saw his doctor. Adam’s concerned about Connor’s worsening nightmares, which are sending the kid into a panic. He’s on the same page with Chelsea about continuing their work with Sharon. Adam admits Connor’s doctor wants them to be a united front for Connor’s sake. He assures Chelsea he doesn’t have an agenda and just wants to take care of their son.

Afterward, Chelsea tells Connor that she’ll stay there for a few days. Connor’s excited and feels like the monsters can’t get him if they’re all together. At Crimson Lights, Billy Abbott (Jason Thompson) talks to Victoria Newman (Amelia Heinle) about his next therapy session. Once Billy’s gone, Nick joins Victoria and reveals that Chelsea’s been staying at Adam’s lately. Victoria gets why that would be upsetting for Nick. Chelsea also gets in touch about her extended stay, which leaves Nick looking pensive later.

At the therapist’s office, Billy talks about quitting his job at Jabot and trying to figure out what’s next. Dr. Clay (Sandra Thigpen) suggests Billy may be looking for a quick fix that doesn’t exist. She asks if Billy likes himself and gets him to ponder his potential self-esteem issues. Dr. Clay feels like maybe Billy’s tendency to self-sabotage comes from not feeling worthy of respect. She wants Billy to get to the root of his issues so he can change his behavior.

At Society, Lola Abbott (Sasha Calle) reassures a nervous Theo Vanderway (Tyler Johnson) about his first day at Jabot. She’s certain Theo’s got all the right skills and is going to crush it. At the Jabot office, Kyle speaks with Summer Newman (Hunter King) about her promotion and expresses disappointment with his own title. Talk turns to Theo, so Kyle’s forced to remind himself that he promised to give his cousin a chance.

It becomes harder for Kyle to keep his word after Theo arrives. Kyle rolls his eyes at Theo at one point. He feels like Theo’s sucking up and doesn’t buy all the clichés he spouts. After Theo makes a motivational speech to his new team, Kyle looks it up and finds the same speech online. He gripes that he should’ve known and eventually talks to Summer about her boy toy.

Summer feels like things are going well for Theo, but Kyle thinks it’s all smoke and mirrors with this guy. Theo’s got charisma, but that’s about it as far as Kyle’s concerned. Summer isn’t loving Kyle’s attitude today, so he apologizes and heads off to see Lola. Unfortunately, there’s no escaping the topic of his cousin. Lola tells Kyle about Theo battling his nerves earlier and feels like it was adorable.

At Newman Enterprises, Billy finds Victoria after his therapy session and nuzzles up to her. He decides to leave again after Victoria has to take a conference call. Billy seems a bit adrift as he gets on the elevator, so it seems he’s still got some problems to work through.

The Young and the Restless spoilers say Billy’s search within will lead him down an interesting path. We’ll keep you posted as other Y&R news and rumors emerge. Stay tuned to see what’s next in Genoa City.

The Bold and the Beautiful Spoilers Wednesday, November 27: Shauna Comforts Ridge – Liam Hears How Hope Got Thomas To Sign The Adoption Papers

The Bold and the Beautiful Spoilers: Thomas And Hope’s Similar Mind Games Come To Light