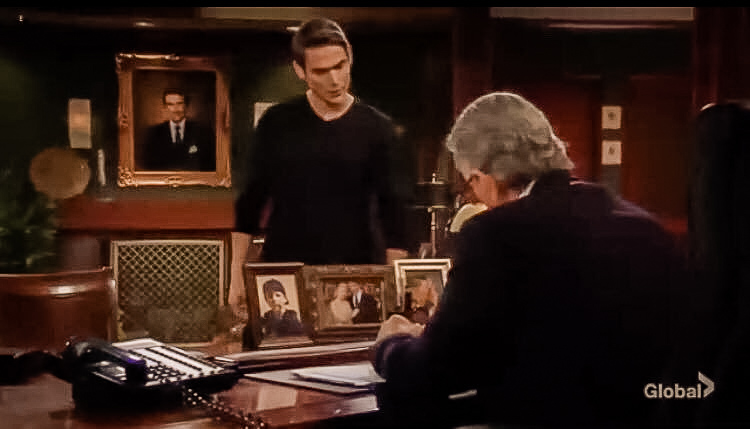 The Young and the Restless spoilers for Wednesday, August 14, tease that Ashley Abbott (Eileen Davidson) and Abby Newman (Melissa Ordway) will catch up at the Abbott Estate. Ashley will be skeptical about Abby’s plan to buy The Grand Phoenix and work with Phyllis Summers (Michelle Stafford), but she’ll be thrilled about Abby’s relationship with Nate Hastings (Sean Dominic). Abby will then explain that she’s not sure where things stand with Nate.

Adam Newman Gets Served With A Restraining Order

Next on Y&R, Jack Abbott (Peter Bergman) will pay Victor Newman (Eric Braeden) a visit at Newman Enterprises, and Victor will figure out that Jack’s checking up on his health. They’ll discuss the situation between Nick Newman (Joshua Morrow) and Adam Newman (Mark Grossman) a bit, and Jack will try to see Adam’s perspective, but Victor will refuse to throw Adam a lifeline – he’s done it several times, but it’s never been enough for Adam.

Meanwhile, Adam will be served with papers at his penthouse. He’ll immediately phone Michael Baldwin (Christian LeBlanc) and tell him that the papers say he can no longer see Christian Newman (Alex Wilson) and that there’s a restraining order against him. He’ll want Michael to fix the situation immediately.

Next, on Y&R, Devon Hamilton (Bryton James) and Elena Dawson (Brytni Spray) will discuss the incident with Christian hiding in the park, which Elena witnessed. She’ll worry about Adam living next door, and Devon will reassure her. Later, Adam will approach Devon wanting to talk to Elena since she saw what happened in the park.

Devon will tell Adam to stay away from Elena, and this will lead to a bigger discussion of what’s going on with Adam and his family. Adam will tell Devon that he’s not the bad guy in the scenario and that he’s received a restraining order, plus Victoria Newman (Amelia Heinle) lied to him about Christian being sick. Devon won’t buy Adam’s “poor me” act and he’ll state that the only victim here is Christian.

Devon will ultimately suggest that Adam compromise, and as they’re discussing the restraining order, Adam will realize that Nick doesn’t have the power to pull off that kind of move – he’ll realize it must have been Victor.

Next on Y&R, at Kyle Abbott (Michael Mealor) and Lola Rosales’ (Sasha Calle) apartment, Lola will explain to Kyle all about the letter from her dad. She’ll reveal that she’s been agonizing over the letter, and that she doesn’t want to be pulled back into the past. She’ll say that she wants to focus on the future instead, and Kyle will promise that he’ll never disappoint her.

The Young and the Restless News: Wedding Drama – Will Kyle and Lola Say I Do? https://t.co/qEyK3noWA9 pic.twitter.com/ZZQUKapaDz

At the Abbott estate, Ashley and Jack will let Kyle, Lola, and Abby know that they’re trying to generate a good name for their new company – the company that will result from the merge. They will consider some ideas, then Kyle will say that no name other than Jabot would ever be right. They’ll all agree to call the company Jabot.

Later, Nate will arrive, and he and Abby will speak privately. Abby will say that she understands if he wants someone who is ready for a serious commitment, and Nate will wonder why it seems like she’s holding back. He’ll suggest that they take things one day at a time, and Abby will ask him to accompany her to Kyle and Lola’s wedding.

Afterward, everyone will toast to Kyle and Lola, and Jack will head out to Miami, promising Lola that he will not come back home alone.

Elena Dawson Gets A Big Opportunity

Next on Y&R, at Crimson Lights, Elena and Nate will talk, and Nate will reveal that an opportunity has arisen at Memorial Hospital that she has a shot at – a residency opening. He’ll think it might be fate, but he’ll say that he’s not trying to pressure her. Elena will state that she doesn’t need to think about it.

Elena will return home and share her great news with Devon – that she’s interviewing for the residency program and her interview is today. He’ll be pleasantly surprised and encourage her. Later, she’ll return with the news that she got the position. The two will kiss and celebrate.

Finally, on Wednesday’s new episode of Y&R, Adam will show up at Victor’s office upset about the restraining order. Victor will tell Adam that he had no choice, and that he’s taking Christian’s side in the matter and that he won’t watch the boy suffer due to Adam. Adam and Victor will then yell at each other and rehash the past, and Adam will needle his dad for not being there for him when he was growing up.