The Young and the Restless Spoilers: Monday, July 1 – Chelsea Rejects Adam – Devon Puts Hilary Behind Him – Phyllis ID’s Kevin As Her Abductor

The Young and the Restless spoilers for Monday, July 1, tease that Nick Newman (Joshua Morrow) will ask Chelsea Newman (Melissa Claire Egan) why she’d come back, and Adam Newman (Mark Grossman) will think that she came back for him. Chelsea will say that she’s tired of running.

Chelsea will then want to talk to Adam alone, which Nick won’t like, but he’ll leave. Adam will stroke Chelsea’s hair and kiss her, saying that he had almost given up hope. He’ll want to take her home.

Next on Y&R, at Society, Kevin Fisher (Greg Rikaart) will try to leave when he sees Phyllis Summers (Michelle Stafford), but she’ll beckon him over to help her with her computer. She’ll smell his cologne and angrily realize that he’s the one who kidnapped her. Kevin will try to deny it, and he’ll slip out when Nick arrives.

Nick and Phyllis will then have words about Chelsea. Nick will blame Phyllis for running Chelsea out of town, and Phyllis will remind Nick about how Chelsea stole and lied. They’ll continue to bicker, and ultimately Phyllis will warn Nick to take off his blinders when it comes to Chelsea.

Next on Y&R, at Devon Hamilton’s (Bryton James) penthouse, he’ll tell Elena Dawson (Brytni Sarpy) and Ana Hamilton (Loren Lott) about some of his memories of Hilary Hamilton (Mishael Morgan), over the box of Hilary’s things that he put together. He’ll flash to various happy memories with Hilary, then have a group hug with Elena and Ana.

Later, after taking Hilary’s things to the church to be donated, Devon will thank Elena or helping to bring him out of the dark, and they’ll kiss. 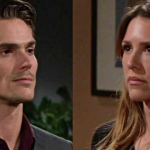 Next on Y&R, Adam and Chelsea will arrive home, but she won’t exactly be into the conversation that Adam wants to have about their son. Instead, she’ll tell him that she wants him to let her go and that she doesn’t want their relationship back.

Adam will have questions about her husband, and in particular whether Chelsea loves him. But Chelsea won’t think that she owes Adam and answer. She’ll say that if Adam loves Connor Newman (Gunner and Ryder Gadbois), then he’ll leave him where he is, in a stable situation.

Someone’s back on your screens today!!! Is this destiny? Or destined for disaster. Watch #YR and find out!!🤓🔥👿😈 @YRInsider pic.twitter.com/qk4k3X8TTU

Finally, on Monday’s new episode of Y&R, Mariah Copeland (Camryn Grimes) will see Kevin at Crimson Lights, and Kevin will note that he messed up his life. Mariah will offer to fix his problems, and she’ll tell Kevin that he needs to take charge of the narrative.

Be sure to tune in on Monday to catch up on everything happening on Y&R right now.

Days of Our Lives Spoilers, Monday, July 1: Hope Spots A Clue–Jack Keeps A Secret From Eve