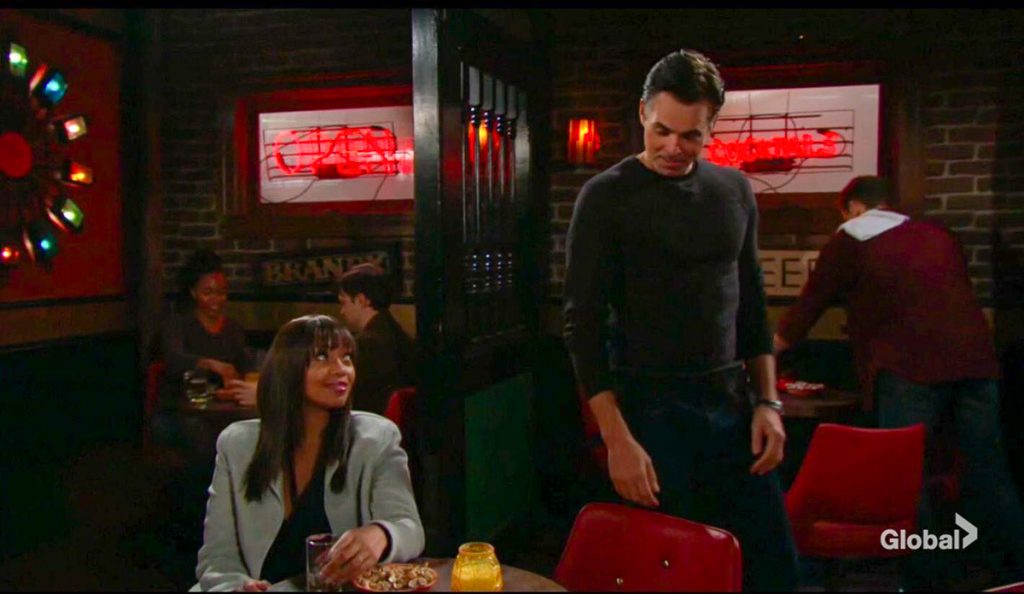 The Young and the Restless (Y&R) spoilers for Monday, December 2, tease that Chelsea Lawson (Melissa Claire Egan) will drop a bomb on Nick Newman (Joshua Morrow). At home, Chelsea reveals that Adam Newman (Mark Grossman) wants her to move in. She explains Connor Newman (Judah Mackey) is getting worse and really needs her support.

Nick is floored that Chelsea’s even considering the idea. Chelsea assures Nick that this is about Connor, not Adam. However, Nick fears there’s no line Adam won’t cross. He eventually decides to step out and get some air.

The Young and the Resteless Spoilers – Billy Abbott is miserable

At Society, Victoria Newman (Amelia Heinle) encourages Billy Abbott (Jason Thompson) to play a little word game with her. She thinks some free association might help Billy figure out what comes next. The topic of construction comes up, so Victoria contends that Billy could get in touch with Nick about New Hope. Billy would prefer to do something on his own.

Once Victoria gets a call and has to handle some business, Billy heads out looking miserable. Nick finds Victoria after her call wraps up, so he unloads his Adam frustration. Chelsea’s vulnerable, so Nick feels like Adam could take advantage and drive Chelsea to do things she normally wouldn’t do. Victoria gets that thanks to the issues Billy’s been dealing with. She’s hopeful Jack Abbott (Peter Bergman) can help Billy out.

After Nick heads home, he finds Chelsea packing up her stuff for the move. Chelsea reiterates that Connor needs his mother, but Nick doesn’t think it’s fair that she’s leaving him as well as Christian Newman (Alex Wilson). Nevertheless, Nick ultimately accepts Chelsea decision and promises to support her in any way he can.

The Young and the Restless Spoilers: Thanksgiving Matters More This Year – Shey And Chick Spend Time Together

Y&R Spoilers – Elena Dawson is not giving up

Devon isn’t pleased that Elena brought Neil into the discussion. They also debate Cane’s involvement since Elena’s not so sure he was really in on it. Elena feels Devon is better than all the people who want to take him down. If Devon’s trying to push her away, it’s not going to work. Elena promises Devon that she’s not going anywhere.

At the Grand Phoenix, Nate Hastings (Sean Dominic) flirts with Amanda Sinclair (Mishael Morgan) briefly before giving her a check for her legal services. Nate also wonders what’s next for Amanda. He once again touts the benefits of Genoa City; it has a lot to offer. Amanda agrees, but her face presents some challenges in this town.

Devon and Elena show up, which leads to some tense moments. They’re not pleased to see Nate hanging out with Amanda, who’s accused of coming to town just to defraud Devon. Amanda heads for the exit, but Nate defends her to Devon. However, Devon feels like Amanda should’ve bolted as soon as she realized she looked like Hilary Hamilton (Mishael Morgan).

Elena also takes her turn with Nate and rants about Amanda being brought to town by Colin. Nate’s unwilling to avoid Amanda just because she’s Hilary’s double. Unlike Devon, Nate doesn’t see Hilary when he looks at Amanda. Elena warns about Nate encouraging Amanda to live in GC. She remains wary of Nate getting too close and insists he should consider what this is doing to Devon.

Meanwhile, Chance finds Abby Newman (Melissa Ordway) and mentions that he’s sticking around. He’s happy to help catch the Grand Phoenix’s thief, so they do some plotting. Abby hopes her social media blast will draw the robber out. Chance assures Abby that the camera’s ready, and they flirt as they watch surveillance footage. Abby’s curious about Chance’s career, but they’re interrupted by another woman claiming she was robbed.

At a dive bar, Billy can’t stop staring at Amanda. She picks up on it and assumes Billy must’ve known Hilary. After a drunk guy hits on Amanda, Billy tries to make him back off. Amanda’s rattled temporarily, but she regains her composure and assures Billy she’s got this. She tells the drunk man he should go outside and clear his head.

Afterward, Amanda thanks Billy for having her back and offers to buy him another drink. He says maybe next time. Once Amanda leaves, Billy’s phone rings. He lets it go to voicemail, so Victoria leaves him a message while he drinks and reflects alone.

The Young and the Restless spoilers say Amanda and Billy will grow closer soon, but will they become friends or something more? We’ll give you updates as other Y&R details and rumors emerge. Stay tuned to see what else is ahead in Genoa City.

Days of Our Lives Spoilers: Lani Reunites With Eli In Italy – Will She Tell Him The Truth About Gabi?