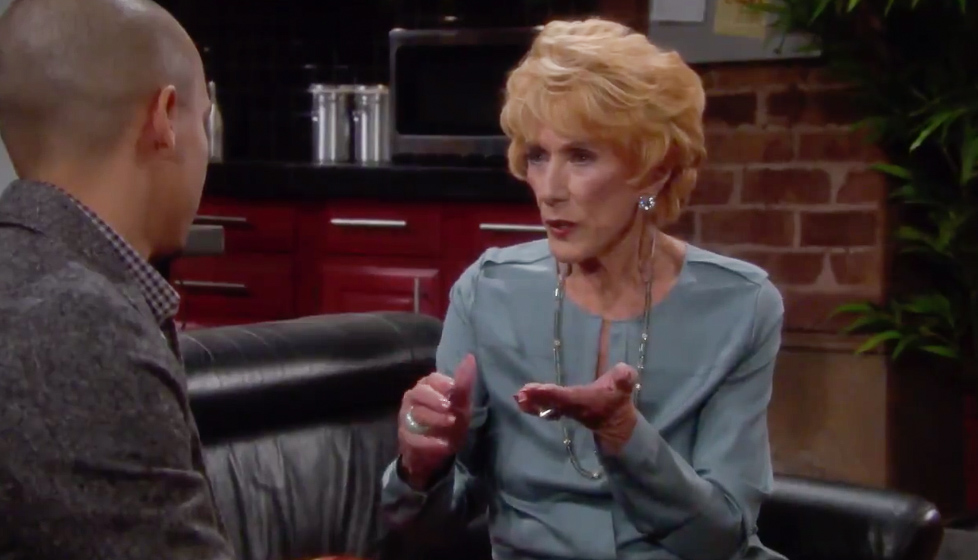 The Young and the Restless spoilers tease that Phlllip “Chance” Chancellor IV (most recently John Driscoll) might be the person disputing his grandmother Katherine Chancellor’s (Jeanne Cooper) will and asking for a fight from her other grandson Devon Hamilton (Bryton James)!

Y & R viewers will recall that in recent episodes Devon received legal paperwork, challenging his inheritance in his grandmother Katherine’s will; the will had been settled quite some time ago, so this mystery challenger was a shock! Devon had looked up the attorney named on the paperwork, Amanda Sinclair (uncast character) but couldn’t find a lot about her online, not even a photograph.

Nick Newman (Joshua Morrow) had dropped by to ask about Devon’s interest in investing in a project, then the doorbell ring and there was Jill Abbott (Jess Walton) at the door. Jill happens to be Chance’s maternal grandmother, Katherine having been Chance’s paternal great-grandmother. The three discuss who potential challengers might be, after all these years, and Jill hopes whoever it is doesn’t think they can question Katherine’s state of mind when she had her will prepared.

Nick brings up Chance’s name as a possible disputer of the will and he and Jill note that they had heard he had been hanging out with Adam Newman (Mark Grossman) in Las Vegas. Devon and Nick wanted to know if Jill had heard from Chance lately, and she said she had tried to contact him and received a cryptic email stating that he was working on something that might be very lucrative.

Devon and Nick told Jill to let them know if she hears anything more from him. After Nick leaves, Jill tells Devon that she hopes that Chance isn’t involved in something sleazy, and Devon warns her if anyone, including Chance, tries to take away what Katherine left him, they are in for a fight!

As Y & R viewers already know, where Adam Newman goes, trouble follows, and if Adam and Chance were involved in anything together in Las Vegas, then either Adam did something untoward to Chance and is trying to pull a scam using his name, or Chance has let the bad company of Adam corrupt his morals! Chance hasn’t been seen on The Young and the Restless or in Genoa City since 2009, and although in his younger years was certainly no angel, he had spent time in the Army, and his military career had garnered him a job at the Pentagon.

That just doesn’t sound like someone who would be trying to challenge his great grandmother’s will and send an email that he was working on something that could be lucrative; it’s also entirely possible that Chance, if he was in Las Vegas with Adam at all, could be in the process of being framed by Adam, and knows nothing about this challenge to Katherine’s will at all!