General Hospital Spoilers: Willow Sees A New Side Of Chase

General Hospital spoilers tease that Willow Tait (Katelyn MacMullen) will see another side to her boyfriend Detective Harrison Chase (Josh Swickard) soon on General Hospital; but might it be one she doesn’t like?

Even though Willow and Chase haven’t nearly gotten close to walking down the aisle with each other yet, Lulu Falconeri (Emme Rylan) tutored Willow on what it’s really like being a cop’s wife in a recent episode of General Hospital.

Every cop’s wife (or husband) knows that ever-present is the fear that honey won’t be coming home that night as usual, and their spouse’s Commanding Officer or the Police Commissioner might show up at their door with terrible news! 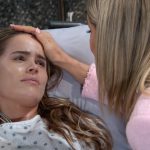 Lulu really put a scare into Willow, as Chase found out the night he arrested Shiloh Archer (Coby Ryan McLaughlin) and Dr. Arthur Cabot (Time Winters) and brought Elizabeth Baldwin (Rebecca Herbst) and Cameron Webber (William Lipton) back to General Hospital and Willow saw two words, “at hospital” and nothing else! Poor Willow was totally freaked out and thought Chase had been hospitalized!

Lulu also mentioned cops can have an “on a mission” side to them and get so involved and preoccupied with catching the bad guy that they can often think of nothing else and bring their case or cases home with them and not be able to leave work at work! It’s like being a golf widow – or widower – only the non-police spouse feels guilty if they call their police spouse on it because they know catching bad guys is important!

But, what it all boils down to is that an obsessive law enforcement professional is just another kind of a workaholic, and one’s spouse could be a doctor, a lawyer, or even a teacher and become obsessed with their work and helping their patients, clients, or students!

Chase has been obsessive with protecting Wiley Cooper-Jones (Eric and Theodore Olson) and taking down Shiloh, but in all of that, he has been obsessive with protecting Willow herself; so once all the hubbub dies down and the baby is safe and Shiloh is behind bars or dead, as the case may well be, Willow may notice a savior obsession in Chase that she never had before and be concerned with it. What if they did get married and he was always on another case, after another bad guy, or acting like he was a danger addict and putting himself out in the front lines when he didn’t have to? What if they had children to come home to and Daddy was always out catching another bad guy instead of being home every night and going to every ball game or every piano recital or ballet and Mommy always had to go by herself? Will this be the new side of Chase that Willow sees, and will she be able to live with it, or will this spoiler turn out to be something good and positive that makes her love him even more?

Stay tuned to General Hospital and keep checking General Hospital spoilers frequently to see how this all works out for Willow and Chase, and for all the latest news, updates and developments!

Days of Our Lives Spoilers: Kristen Knocks Out Stefan and Gabi – Will ‘Stabi’ Survive Her Rage?

Days of Our Lives Spoilers: Will Rafe And Hope Ever Reconcile?