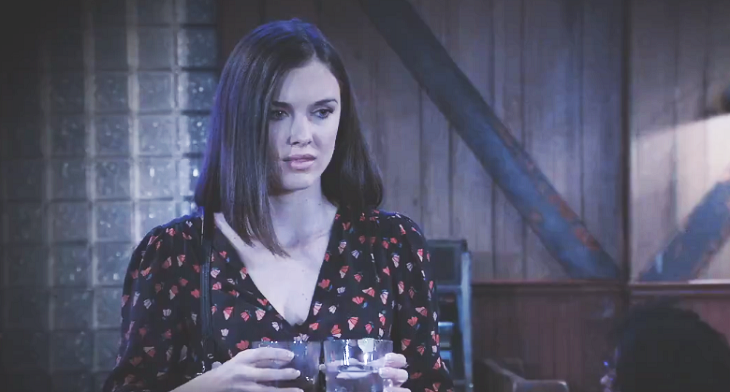 General Hospital spoilers tease that Willow Tait (Katelyn MacMullen) will make a rash decision this week on General Hospital. Will she kidnap baby Wiley Cooper Jones (Eric and Theodore) out of desperation? Maybe she won’t actually kidnap him, but just “borrow” him.

Nonetheless, if she has him to herself she won’t want to give him back. The trouble is, he really is not her child, he’s Jonah Corinthos, Michael Corinthos (Chad Duell) and Nelle Benson’s (Chloe Lanier) child, and she has no way of knowing that!

Other General Hospital spoilers tease that Shiloh Archer (Coby Ryan McLaughlin) may be her baby’s father, and that Willow is the “her” he tasked Harmony (Inga Cadranel) to track down and bring back to him and Dawn of Day.

She had very good reasons for giving her child up, but the problem is, no one but Brad Cooper Jones (Parry Shen) and Julian Jerome (William DeVry) know the original baby died, other than Nelle and Liesl Obrecht, (Kathleen Gati) who delivered Jonah.

General Hospital Spoilers: How Far Will Kristina Go To Prove Her Loyalty To Shiloh?

Liesl won’t just randomly spill this secret though, because she keeps her bargaining chips close to the vest in case she needs them later. The ironic thing is, Willow has been going to a support group for grieving parents at General Hospital, which is where she met Michael. But she has no idea that her child really did die of crib death, also known as SIDS or Sudden Infant Death Syndrome when he was only a few hours old.

A new General Hospital promo called “Dante Returns” shows Willow becoming startled by something in her classroom, dropping a container of water and breaking it on the floor. And Detective Harrison Chase (Josh Swickard) will enter the classroom with a shocked look on his face. Could she have spotted Harmony or Shiloh through a window and this is what prompts her to take Wiley?

Willow may want to protect him and is afraid they will find out who has him and where he is. With the Dawn of Day cult being revealed as more and more dangerous, they could even be into child sacrifice or at the very least a black market baby scam.

Young And The Restless Spoilers: Thad Luckinbill Teases J.T.’s End And His Future At Y&R