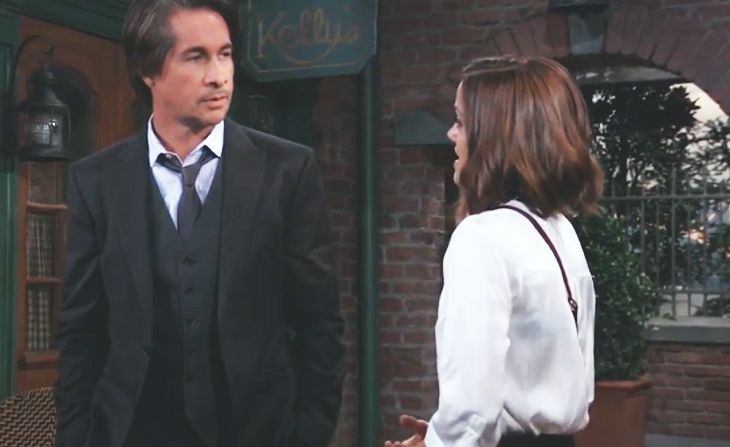 General Hospital spoilers tease that Hayden Barnes (Rebecca Budig) will respond to Dr. Hamilton Finn’s (Michael Easton) request to meet this week on General Hospital. But will she come clean about Baby Finn?

General Hospital viewers will recall that when Hayden left Port Charles a couple of years ago, she was pregnant. Finn and Hayden had gotten engaged and on their wedding day Hayden didn’t show up and mysteriously disappeared.

She didn’t even tell her newly found sister, Elizabeth Baldwin (Rebecca Herbst) about her leaving town. Finn and Liz both knew, however that Hayden was pregnant. She even babysat for Elizabeth to see what taking care of a then tiny one was like, and admitted it freaked her out just a bit, although she adored Spencer Cassadine (Nicolas Bechtel).

General Hospital Spoilers – There Was Good Reason She Left So Suddenly

As General Hospital viewers will also recall, there was a good reason she left so suddenly, and that was because her ex-husband Jared Preston Jr. (Matt Corboy) was blackmailing her. Hayden had driven drunk and hit and killed a little girl, and Jared took the fall for her. Liesl Obrecht (Kathleen Gati) had wanted revenge against Finn and Hayden and drew Jared to town.

General Hospital Spoilers: Willow Sees A New Side Of Chase

Hayden did some creative bookkeeping at ELQ to pay him off and then did some more creative bookkeeping to put the money back. Of course her alter ego Rachel Berlin would have learned that fancy footwork from her Ponzi-scheming father, Raymond Berlin (Robert Curtis Brown). She had admitted her wrongdoing to Finn, and he had forgiven her and said he didn’t care about her past, but she bailed at the last minute anyway.

Finn hired Curtis Ashford (Donnell Turner) to track Hayden down, but he was not able to bring her back. However, he did bring a letter back from her, explaining she had miscarried and there was no longer anything to tie them together. General Hospital then left fans with a cliffhanger – a scene of Hayden standing up and rubbing her pregnant belly after sealing the letter! So now that Hayden’s back in town, what happened to Baby Finn?

Of course, there is the possibility that after Hayden wrote that letter she really did miscarry at some point, and if so, there would be no reason for Hayden to admit she lied about the baby if she lost it after she wrote the letter. But if the baby is alive, even if she had given it up for adoption, Finn would still have a right to know what happened to his child.

If Hayden didn’t want the baby or was unable to care for the baby it doesn’t mean Finn may not want to search for him and her and give the baby a home. However, that is a decision that he needs to consult with his fiancé, Anna Devane (Finola Hughes) about before he commits.

Anna may not want to be the stepmother to a small child at this point in her life, but then, maybe she would. She may feel like it was making up for missing her own daughter Robin Scorpio-Drake’s (Kimberly McCullough) formative years.

Days of Our Lives Spoilers: Tripp Admits His Feelings for Haley – New Love Triangle In The Works?

The Bold and the Beautiful Spoilers: Wednesday, August 14 – Delusional Thomas Wants Hope Back – Logan Sisters Welcome Beth To The Family