General Hospital (GH) spoilers for Wednesday, June 12 promise another episode with exciting drama and tense situations for General Hospital viewers as some mysteries draw near to their end, but others begin!

Maxie Jones (Kirsten Storms) reaches out to Josslyn Jacks (Eden McCoy) and lets her know she can talk to her anytime. Maxie has much experience in common with Joss; Maxie is a widow, having lost her husband Nathan West (Ryan Paevey) a couple of years ago, plus she lost her sister Georgie Jones (Lindze Letherman). Joss has lost both her boyfriend Oscar Nero Quartermaine (Garren Lake Stitt) recently, and her older brother Morgan Corinthos (Bryan Craig) a couple of years ago. Maxie can offer Joss an understanding shoulder to cry on if she wants to take her up on it!

Over in the Crimson office, Jasper Jacks (Ingo Rademacher) is in a tense meeting with Nina Reeves (Michelle Stafford) and Ava Jerome (Maura West), who Nina has convinced to let her do a cover story on her. Jax buttonholes Ava, asking exactly how she’s planning to answer those questions, presumably the ones having to do with Ava’s crimes! 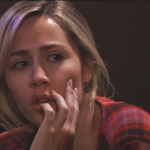 Over at General Hospital, Dr. Kevin Collins (Jon Lindstrom) and Stella Henry (Vernee Watson) look on as Jordan Ashford (Briana Nicole Henry), now able to stand up with an IV still attached to her, interrogates her husband Curtis Ashford (Donnell Turner) about her kidney transplant and asks the group with her, “One of you want to tell me what’s going on?”

Meanwhile, in the Pentonville Prison infirmary, Dr. Hamilton Finn (Michael Easton) says “Welcome home, Ryan” as a confused Ryan Chamberlain (Jon Lindstrom) wants to know how the hell he got there! That’s understandable since the last thing he knew he had suffered a seizure and was given a sedative at General Hospital and now he’s in a prison infirmary!

Nina is going to have to work hard if she wants Ava Jerome on the cover of Crimson. Can she be convinced?
An all-new #GH starts RIGHT NOW on ABC! @MauraWest pic.twitter.com/3n3F49FRqb

On the other side of the world, Drew Cain (Billy Miller) and Kim Nero (Tamara Braun) are in their hotel room when Kim feels a little unsteady—and faints, as Drew catches her! Have they finished scattering their son Oscar’s ashes at the summit of Mount Kilimanjaro yet, or will it have to be postponed because of Kim’s own health issues?