General Hospital (GH) spoilers for Wednesday, July 17 tease that Carly Corinthos (Laura Wright) wants to get Josslyn Jacks’ (Eden McCoy) opinion on something. It is probably about their new houseguests and Sonny Corinthos’ (Maurice Benard) drive to protect the teen.

Joss will probably tell her mother that she has a bad feeling about him and she doesn’t want him to stay in their house. But Carly might beg her to be patient because, for some reason, Sonny really enjoys the kid’s company.

Liz Baldwin (Rebecca Herbst) was expecting her son, Cameron Webber (William Lipton) to oppose her marriage to Franco Baldwin (Roger Howarth). But he sees how happy his family is, and he cannot help but support their union. It will take both Franco and Liz by surprise.

Across town, GH spoilers say that Sonny will be upset with Ava Jerome (Maura West). We aren’t sure what the deal is yet, just that he’s mad and he isn’t going to be shy about it on Wednesday’s episode.
It could be about Kiki Jerome (Hayley Erin). He might say that he cannot believe she hired a psychic to try to reach her from beyond. GH spoilers suggest Sonny thinks the woman she hired is nothing but a con.

Even though Shiloh Archer (Coby Ryan McLaughlin) is currently behind bars, Lucas Jones (Ryan Carnes) cannot help but worry about the Wiley situation. General Hospital spoilers state that Lucas wants to find out for sure if Shiloh is really Wiley’s dad. He cannot have any unanswered questions if he is going to protect his adopted son. 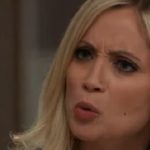 Later this week, Nina Reeves (Cynthia Watros) will find out that there is a possibility that Wiley is not Shiloh’s child. The scoop will stun her as she wonders how that could be. It will lead to rush to find out who could be Wiley’s father.

The truth is, it’s not Wiley at all. The infant is Jonah and he belongs to Michael Corinthos (Chad Duell) and Nelle Benson (Chloe Lanier).

And speaking of Michael, soon his life will be turned upside down when Sasha Gilmore (Sofia Mattsson) will make a declaration. The only thing that makes sense is she will say that she is sticking around in Port Charles and that she is falling in love with him.

Let’s hope that’s what it is because they make a cute couple. The only problem is, when it comes out that she lied about being Nina’ daughter, Michael might not want anything to do with her.

Do you trust Dev? Do you think they will find out that Wiley isn’t Shiloh’s son?

Days Of Our Lives Spoilers, Wednesday July 17: Jen Makes An Impassioned Speech – Gabi Has Her Eye On “Nicole”