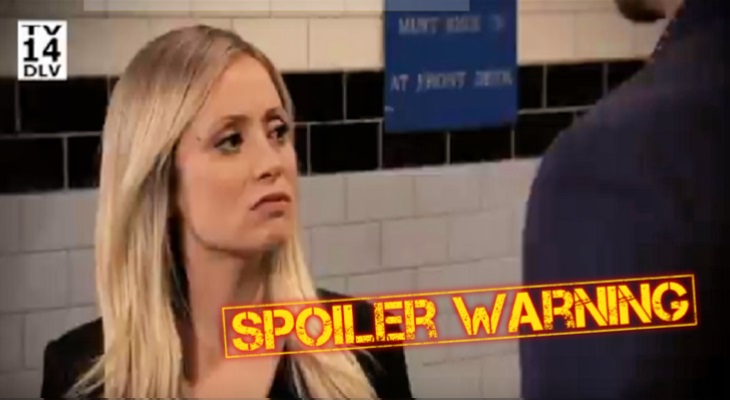 “General Hospital” spoilers for Wednesday, February 27, tease that Maxie Jones (Kirsten Storms) will be happy to help. She’ll rush to Lulu Falconeri’s (Emme Rylan) aid after the investigative journalist has a stunning realization. Lulu will contend that she’s missed a big part of these murders. She’ll feel like she’s ignored something that’s been staring her in the face, so she’ll fill Maxie in.

Will this have something to do with the victim count discrepancy? Just before Lulu was attacked, she determined that “Dr. Kevin Collins” aka Ryan Chamberlain (Jon Lindstrom) had nine victims on his list. She could only find evidence of seven online, so that left her puzzled. If that comes up on Wednesday, it could leave her puzzled once again.

Of course, Lulu’s declaration about “there murders” could be referring to the ones that happened recently. Either way, Maxie will assist Lulu as she sorts this out. Over with Ryan, he’ll blast Franco for the bogus story he gave during his interview. Ryan will shout that Franco needs to tell the truth, and it looks like Franco will indeed come clean. After all, he believes Ryan is his trusted therapist.

Unfortunately, Franco’s admission should spell trouble. The last thing Franco should be doing is blabbing to the killer himself. Elsewhere, GH fans can expect a conversation between Elizabeth Webber (Rebecca Herbst) and Drew Cain (Billy Miller). Liz won’t know how she can keep her faith in Franco alive, but Drew may push her to hang in there. He truly believes something more is going on.

Other “General Hospital” spoilers say Cameron Webber (William Lipton) will have mixed emotions. Part of him will feel vindicated by Franco’s on-air murder details. He’ll think he was right all along, but he’ll still feel betrayed, furious and confused. It’s good that Josslyn Jacks (Eden McCoy) and Oscar Nero (Garren Stitt) will be around to support Cam on Wednesday.

General Hospital – Ava Will Get Yet Another Warning About Kevin

Next, Ava Jerome (Maura West) will get another warning about “Kevin.” Scott Baldwin (Kin Shriner) will argue that Ava’s setting herself up for heartbreak. He’ll believe it’s just a matter of time before “Kevin” kicks Ava to the curb like he did Laura Webber (Genie Francis).

Ava will suggest that things are different in her new relationship. She’ll trust that “Kevin” can be the man she needs him to be, but she’s got it all wrong! Ava is engaged to Kiki Jerome’s (Hayley Erin) killer, so that bombshell will cause chaos down the road.