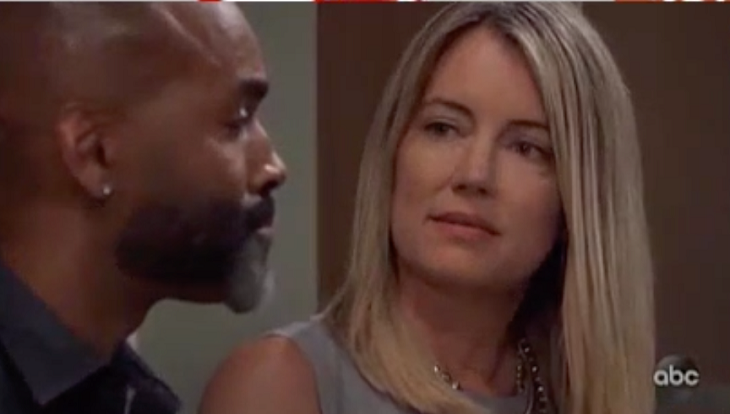 Meanwhile, Lulu is somewhere else, possibly with an online date she set up for her investigative story on a burglar who uses online dating apps to find victims, all female. She says to someone in a very bubbly, upbeat manner, “I’m exactly that kind of woman!”

Meanwhile, Julian Jerome (William DeVry) comforts Dr. Kim Nero (Tamara Braun) and expresses his love and support as he tells her he thinks that something could be the best thing that ever happened to him, but it may not be in response to her asking him to father a baby with her!

Elsewhere, former District Attorney Margaux Dawson (Elizabeth Hendrickson) is still in Port Charles, and she approaches Drew Cain (Billy Miller) and asks him for something she needs from him; what could that be?

Back at Casa Corinthos, Carly Corinthos (Laura Wright) tells Josslyn Jacks (Eden McCoy) exactly what she thinks Joss needs; grief counseling! It may not be a bad idea since Joss is not handling her grief over Oscar Nero Quartermaine (Garren Lake Stitt) very well and not being able to let go or move past it.

Meanwhile, Sonny Corinthos (Maurice Benard) talks to someone in the Corinthos kitchen and says “we have a problem!” Could it be more problems with Shiloh Archer (Coby Ryan McLaughlin), or could he be talking about Joss, or something else? Mysteries abound!

The Bold And The Beautiful Spoilers, Tuesday, June 18: Hope Will Be Taken Aback- Wyatt & Liam Organize A Get- Together