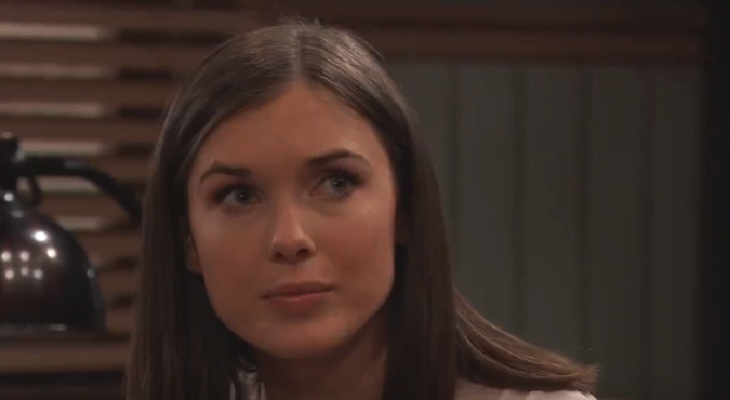 “General Hospital” spoilers for Tuesday, April 16, tease that some big surprises are coming up in Port Charles. We should point out that Monday’s episode will move to Tuesday due to the preemption, but there’s plenty of new information to cover. Let’s talk about some of some exciting shockers happening in Tuesday’s show.

First, Brad Cooper (Parry Shen) will show great interest in Dawn of Day. He’ll sing the community’s praises to Lucas Jones (Ryan Carnes), who won’t be quite as impressed. Still, Brad will try to talk Lucas into attending a seminar at the DoD house. As Willow Tait (Katelyn MacMullen) listens in on their chat, she’ll grow increasingly concerned.

Lucas will eventually introduce himself to Willow since he’s seen her talking to Brad before. Once Brad learns Willow’s sticking around in PC, he won’t seem too happy about it! Over with Jason Morgan (Steve Burton), he’ll give Elizabeth Webber (Rebecca Herbst) the cup he took from the DoD attic. Jason will count on Liz to have it tested for him, so she’ll give it to Brad.

When Shiloh runs into Brad at GH, he’ll question him about the cup he’s holding. Shiloh will assume Jason’s to blame for this, so he’ll assure Brad that Dawn of Day is perfectly innocent. The cult leader will argue that Jason’s the one who wants to smear their organization and destroy what they’ve built.

Shiloh will advise Shiloh to claim there were no drugs in the cup, so Brad will do what he’s told when he meets up with Jason. Meanwhile, Sam McCall (Kelly Monaco) will search through Kristina Corinthos-Davis’ (Lexi Ainsworth) room with Daisy Kwan’s (Kelsey Wang) help. After getting permission from Shiloh, they’ll dig around as Daisy mentions the consequences of Kristina running off.

Sam will pressure Daisy to reveal more, but “General Hospital” spoilers say Shiloh’s scared follower won’t say much. She’ll only bring up “the pledge” and how important it is. Back with Willow, she’ll tell Michael Corinthos (Chad Duell) that she’s going to talk to Kristina. Willow will just want to steer clear of Shiloh and the community house when she does it.

During this conversation, Willow will talk about her sex session with Shiloh. Michael will put the clues together and determine that Willow’s baby belonged to Shiloh. That’ll lead Willow to confess that her child didn’t die, but GH viewers know he actually did. This mystery will bring some major twists and turns, so stay tuned.

General Hospital Spoilers – Cameron Webber Gets Into A Brawl At School

However, Spencer Cassadine’s (Nicolas Bechtel) actions will change the game. He’ll fill Nina Reeves (Michelle Stafford) in on Valentin’s blackmail and urge her to have a chat with him. Spencer will hope Nina can make Valentin back off. He’ll mention that Valentin’s keeping secrets about Sasha Gilmore (Sofia Mattsson), but Valentin will enter to cover his tracks. He’ll drop the whole custody thing and assure Nina that he just gave Sasha shopping money.

Other “General Hospital” spoilers say Cameron Webber (William Lipton) will get into a brawl at school. Franco Baldwin (Roger Howarth) and Elizabeth Webber (Rebecca Herbst) will naturally want to know what happened. They’ll find out that someone called Aiden Webber (Jason David) “a fairy boy,” so Cam beat the bully up.

Cameron will suggest that maybe Aiden could be a “little less gay,” which will provoke Franco’s wrath. Liz will also scold Cam for his response, so expect more “Friz” family chaos. We’ll give you updates as other news and rumors emerge. Stick with ABC’s GH and don’t forget to check Soap Opera Spy often for the latest “General Hospital” spoilers, rumors, updates and news.

‘Days Of Our Lives’ Spoilers: Devastated Jennifer Confides In JJ She May Have Lost Jack For Good

Bold And The Beautiful Spoilers Tuesday, April 16: Flo Reveals A Secret – Bill Comes To A Realization About Quinn