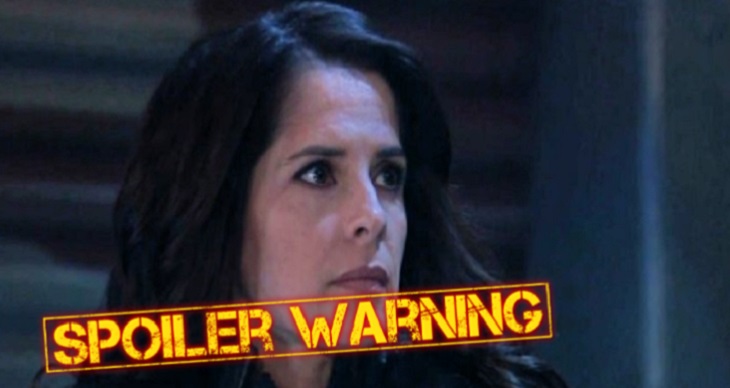 “General Hospital” spoilers for Thursday, January 10, tease that Dr. Hamilton Finn (Michael Easton) will have a chat with Alexis Davis (Nancy Lee Grahn). Naturally, the topic of Finn’s relationship will come up. Alexis was once interested in pursuing a romance with Finn, but she understood when he chose Anna Devane (Finola Hughes). She’ll assure Finn that she’s happy for them and the love they’ve found.

Finn will confess that he’s happy, too. He’ll hope to keep things moving in this positive direction, but GH is about to throw “Fanna” some major curveballs soon. Until then, Anna will focus on the second chance she’s been given. It sounds like Anna will reach out to Peter August (Wes Ramsey) again and try to keep mending fences.

Peter will also stop by Lulu Falconeri’s (Emme Rylan) place on Thursday. “General Hospital” spoilers say they’ll discuss the serial killer and the missing connection the cops can’t nail down. Lulu will plan to find it for them, but Peter will express concern. He’ll wonder what Lulu intends to do when she finds this missing link. It could be dangerous to head down this dark road.

Nevertheless, Lulu won’t be deterred. She’s got a nose for news and she can’t rest until she finds the whole truth. Over with Mac Scorpio (John J. York), he’ll unknowingly put crucial info in the killer’s hands. During a chat with “Dr. Kevin Collins” aka Ryan Chamberlain (Jon Lindstrom), Mac will spill the details he learned from Jordan Ashford (Briana Nicole Henry). He’ll insist this has to stay between them.

“Kevin” will promise Mac that the secret’s safe, but that’s obviously not true! Ryan will mull over the driver’s license clue the police have picked up on. He’ll have to decide how he’s going to use that to his advantage. Port Charles will also have a new mayor by the time this episode is over. PC residents will be glued to their TV screens as the final results come in and the winner is announced.

It turns out Laura Collins (Genie Francis) will emerge victorious, but Ned Quartermaine (Wally Kurth) won’t mind. He considers Laura a worthy opponent and Olivia Quartermaine’s (Lisa LoCicero) missing their privacy anyway. This will ease Olivia’s mind and give them a little more alone time from now on.

Down by the docks, Jason Morgan (Steve Burton) and Sam McCall) will face a shocker. They’ll be taken aback when they run into Shiloh Archer (Coby Ryan McLaughlin). He’ll think it’s lucky that he spotted them. Shiloh will ask for help with something, which will earn him some suspicious looks from Sam and Jason. They know better than to trust Shiloh, so they’ll proceed with caution.