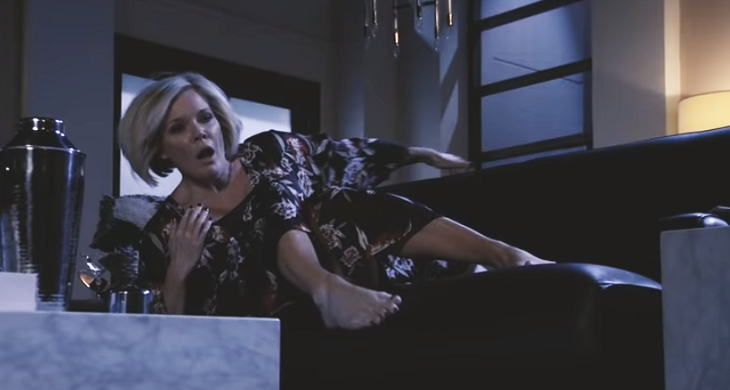 “General Hospital” spoilers for Thursday, April 4, tease that Josslyn Jacks (Eden McCoy) will be in panic mode. After Oscar Nero (Garren Stitt) keels over and has another seizure, Joss will call for paramedics right away. She’ll be terrified as Oscar’s time continues to run out.

At the boxing gym, Curtis Ashford (Donnell Turner) will let Drew Cain (Billy Miller) know he’s got his back. Likewise, Julian Jerome (William deVry) will be there for a glum Dr. Kim Nero (Tamara Braun). It’s great that Oscar’s parents have a support system. That’ll be more important than ever once they hear the latest news about Oscar.

Other “General Hospital” spoilers say Carly Corinthos (Laura Wright) will have a chat with Epiphany Johnson (Sonya Eddy). She’ll mention that there are some things you never forget, so this may be about raising a child. Then again, Carly’s also faced some trauma that will stay with her. She’ll certainly never forget getting thrown in the back of Ryan Chamberlain’s (Jon Lindstrom) trunk and tossed down a ravine!

Speaking of Ryan, he’ll haunt Ava Jerome (Maura West) in an awful nightmare. She’ll dream that Ryan’s trying to strangle her, so he’s still tormenting her in many ways. Jordan Ashford (Briana Nicole Henry) will soon announce that Ryan’s been found, but does that mean his body or an alive and well culprit? Regardless, Ava will remain uneasy and so will Lulu Falconeri (Emme Rylan).

“General Hospital” spoilers say Lulu will arm herself with a vase and yell at someone to stay away. She’ll clearly be alarmed by someone who walks in, so this could be another case of twin confusion. Dr. Kevin Collins (Jon Lindstrom) looks just like Ryan, so Lulu could mistake Kevin for his brother if she’s on edge.

Laura Webber (Genie Francis) will also be taken back in Thursday’s episode, so she could also get involved here. She’ll definitely support Lulu as she deals with Dante Falconeri’s (Dominic Zamprogna) recent departure. Laura will think Lulu should leave Port Charles for a while, so she may encourage her daughter to chase after Dante.

Unfortunately, GH fans know that’s not what Dante wants. He’d probably just turn Lulu away, so she may choose to stay put in PC. Back with Jordan, she’ll get some updates on her dialysis. Stella Henry (Vernee Watson) will loom glum as she provides them, so Jordan may get a bad report. Her kidney crisis will definitely get worse before it gets better.

Finally, Laura and Kevin will discuss the state of their marriage again. They’ll talk about the divorce papers that Alexis Davis (Nancy Lee Grahn) handed over, but will they really end their marriage? Let’s hope love will endure! We’ll keep you posted as other details and rumors emerge.